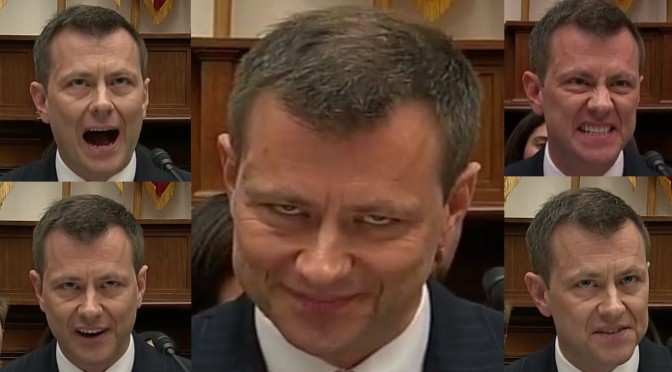 FBI Agent Peter Strzok and his FBI Crossfire Hurricane unit were focused on the White House during President Trump’s inauguration celebration, so much so that the “angry” agent complained he was kept out of the loop on a bureau counter-intelligence briefing there.

Mr. Strzok, who would later be fired for his anti-Trump messages to FBI lawyer Lisa Page, erupted the day after Mr. Trump became president, according to newly released emails obtained by Judicial Watch, a conservative watchdog in Washington.

Mr. Strzok said in an email to his boss, counter-intelligence chief Bill Priestap, he could have folded the FBI briefing into his strategy for investigating Trump associates.

“I heard from [redacted] about the WH CI briefing routed from [redacted],” Mr. Strzok said. “I am angry that Jen [colleague Jennifer Boone] did not at least cc: me, as my branch has pending investigative matters there, this brief may play into our investigative strategy, and I would like the ability to have visibility and provide thoughts/counsel to you in advance of the briefing. This is one of the reasons why I raised the issue of lanes/responsibilities that I did when you asked her to handle WH detailee interaction.”

The afternoon and night before the inauguration, a bevy of heavily redacted emails were exchanged by Mr. Strzok and other high-ranking counter intelligence officials.

“These documents suggest that President Trump was targeted by the [then-director James] Comey FBI as soon as he stepped foot in the Oval Office,” said Judicial Watch President Tom Fitton.

By inauguration day, the FBI had reversed its decision to close a case on retired Lt. Gen. Michael Flynn, Mr. Trump’s national security adviser. Agents were examining his phone calls during the transition with Russian ambassador Sergey Kislyak. Three days later, Mr. Strzok would travel to the White House to interview Mr. Flynn, who would pled guilty in December 2017 to lying. The Trump Justice Department moved in May to drop the case, citing undisclosed FBI files that would have helped Mr. Flynn’s case.

Judicial Watch said the Strzok conversation was among 136 pages of emails–––some heavily redacted––– released by the FBI based on an original December 2017 Freedom of Information Act (FOIA) submission for all Strzok-Page messages.

The release contains other Strzok missives.

He disputed a story in January 2017 in the British Independent that said Christopher Steele, author of the influential and ultimately discredited dossier, suspected there was an FBI “cabal” which prioritized the Hillary Clinton email probe over the Trump-Russia matter.

“Of course not accurate (the coverup/cabal nonsense),” Mr. Strzok wrote to agent Michael Kortan, assistant director for public affairs, and Ms. Page. “Is that question gaining traction anywhere else.”