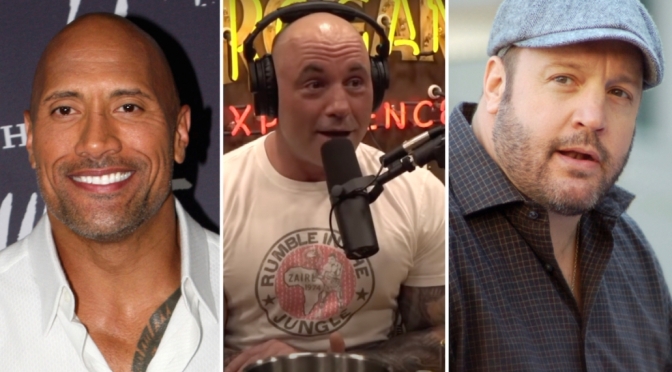 Dwayne “The Rock” Johnson and veteran comedian Kevin James are among the many entertainers lending support to Joe Rogan as his podcast comes under fire for spreading COVID-19 misinformation.

Hundreds of scientists and health care professionals signed an open letter in January accusing The Joe Rogan Experience of being “mass-misinformation events,” and last week Neil Young asked Spotify to remove his music if it planned to continue platforming Rogan.

Rogan responded on Sunday, sharing a video defending his podcast while promising to “balance things out” and “research topics.” Many celebrities applauded this statement in the comments.

“Great stuff here brother,” The Rock wrote. “Perfectly articulated. Look forward to coming on one day and breaking out the tequila with you.”

James, star of King of Queens and the Paul Blart: Mall Cop franchise, added, “Joe – we go way back and all these years I’ve known you to be nothing but objective and seeking truth. Thank you. Love you brother.”

“You’re doing a great job,” singer Jewel wrote, “Keep it up.” The electronic artist Kaskade said, “Nailed it.” Comedian Andrew Dice Clay wrote, “SO WELL SAID. AND I AM SO PROUD OF HOW YOU HAVE HANDLED IT All . STAY STRONG MY FRIEND !!!”

Kat Von D shared emojis of praise hands and hearts, while television announcer and former NFL quarterback Troy Aiken posted the 100 symbol. Marianne Williamson, the spiritualist and former presidential candidate said, “I’m triple vaxxed, but (unless they’re standing for hate or calling for violence) banning someone’s podcast is too much like burning a book to me.” She added, “Joe Rogan should talk on his podcast about whatever he damn well pleases.” Republican politicians and conservative commentators also leapt to Rogan’s defense. Scroll through the comments on his Instagram video to see more.