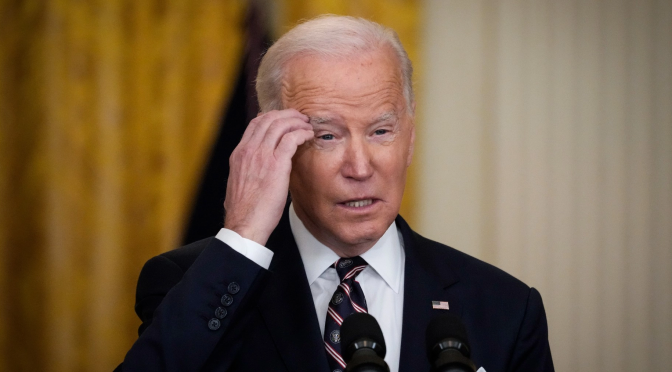 OPINION: This article may contain commentary which reflects the author’s opinion.

Texas GOP Rep. Ronny Jackson, who previously served as the White House physician under the Obama and Trump administrations, says he has concerns about President Joe Biden.

During an interview on OAN with host John Hines, Jackson slammed Biden when asked about his mental fitness for office.

“I’m not trying to make a diagnosis,” Jackson said. “But I think the whole world sees that he’s having some issues. He’s struggling cognitively. It’s not a good time to have a commander-in-chief and a head of state that’s having these particular issues. I think there’s something going on … it’s a national security issue at this particular point.”

Jackson said Biden’s mental fitness for office was “dangerous” and that the president needed to be under cognitive testing “immediately.”

During an interview last month, Jackson spoke about Russia invading Ukraine and the implications it can have on the world.

Jackson said Biden needs to undergo an immediate cognitive exam because he is “not fit to be our president right now.”

“The whole country is seeing his mental cognitive issues on display for over a year now, and there’s really no question in most people’s minds that there’s something going on with him, that he’s not cognitively the same as he used to be and, in my mind, not fit to be our president right now,” Jackson said during an interview.

“Every time he gets up and talks to the American people, it’s not just the American people that are watching him speak, it’s the whole world, and that’s part of what the problem is here,” Jackson also said. “He looks tired, he looks weak, he looks confused, he’s incoherent, and it sends a message of weakness all over the world, and they’re seizing up on that,” he added.

Jackson said that Biden’s mental fitness for office, or a lack thereof, “was on full display during the debacle in Afghanistan” and that it could “get more Americans killed” and “ultimately get us in a war because of his lack of leadership.”