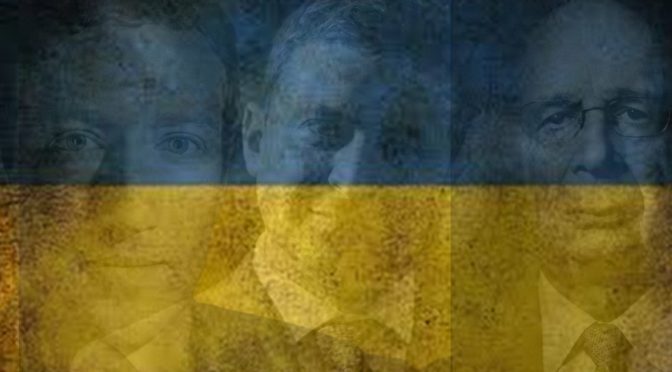 Ukraine is transferring citizens’ power to the state and handing it over to the WEF and other Supranational organizations.

A global system of totalitarian technocracy has arrived, and Ukraine has happily been globalists’ Great Reset Laboratory.

In the middle of a war, Ukraine has been stealthily working hard on being the first nation to implement virtually all the World Economic Forum’s (WEF) Great Reset key hallmarks: Digital identity, Vaccination passports, Universal basic income (UBI), Chinese style Social credit scores which are all combined in their already operational Diia app. The country is transferring citizens’ power to the state and handing it over to the WEF and other Supranational organizations.

Read the following article: “In the shadow of war: Ukraine as the great reset laboratory of the global tech elite” by Julian Schernthaner at German news site Wochenblick to learn more…

While a very real conflict is raging in Ukraine, spotlights aren’t shining on the struggles of digital distribution. Yet the advocates of radical world restructuring and total surveillance recognized long ago the potential of this Eastern European country. With the vigorous participation from President Volodymyr Zelensky, Ukraine would be a Mecca for US bio-weapons laboratories and pave the way for digital networking, the Metaverse, and a transparent citizenry. The linchpin is the digital ID app known as “Diia,” an acronym for “The Government and me.”

The journey started in 2019 after Zelensky had only been in office for just a few months. The “Ministry for Digital Transformation” was founded, with the main task of creating a government platform for smartphones. The Diia app was launched in February 2020. Since then, progress has been accelerating. With more than 50 applications, online identification, and official governmental channels available via the app which include: Driver’s license, Covid vaccination passport, student ID card, the ability to set up a business, apply for insurance, and receive social benefits. A French tech portal wrote the following about it: “A model we previously only knew from China with its social credit system.” By the way, “ID Austria” is also supposed to go in this direction in its final expansion.

As a social credit system, it must also be implemented quite literally. Last year, Zelensky promised rewards of 1,000 Hryvnia (about 30 euros) – about one-tenth of a typical monthly salary – to any citizen who provided proof of a full vaccination record in Diia. Authorities are no longer permitted to insist on paper documents – and observers believe that the dual option is only a temporary solution. The timing is hardly a coincidence. Two weeks before it went live, Zelensky was named “Guest of Honour” for the first time at the World Economic Forum (WEF) summit hosted by the “Great Reset” architect Klaus Schwab.

Zelenski’s speech at the World Economic Forum included the buzzword of a “new normal.” He claimed that current global institutions do not function efficiently and that international security must be rethought. He presented a vision in which Ukraine would take a leading position in Central and Eastern Europe. In doing so, he openly gave his country’s opportunity for investment, recalling that many “big tech” companies started in garages. He presented his dream of a kind of Eastern European Silicon Valley that would turn his country into an “investment mecca.” Or, as Zelenski put it: “Ukraine is the place where miracles come true […] there is a substantial opportunity to expand new economic sectors”.

Schwab was enthused by the idea and pleased about the “reforms” in the country, many of which had been initiated by the WEF itself through WEF subordinate think tanks in Ukraine. However, the WEF isn’t alone in the interest of Ukraine. The globalist Atlantic Council, for example, recognized the potential for “innovation” shortly after Zelensky’s inauguration and mentioned an app that can operate door intercom systems by cell phone, as well as the blockchain company Bitfury. The Atlantic Council praised the developments as positive and mentioned a number of other IT companies in Ukraine. At a networking meeting, Schwab’s “young world leaders,” Justin Trudeau and Zelenski, discussed how to deepen such “innovations further.” Davos also has its own “Ukraine House,” which is regularly available for “networking” during WEF meetings.

After the WEF appeal, things moved quickly. A deal was quickly struck with Apple to jointly conduct a digital census in 2023. Once again, using the Diia app and the U.S. company assisting to improve it. In particular, Apple will identify “priority projects that will promote Ukraine’s transition to paperless mode.” Once again, the collaboration is running under the “Ministry of Digital Transformation” – and is not an isolated case.

As recently as 2020, the Ministry finalized a similar deal with Microsoft, which was expected to add $500 million in value. The collaboration is said to be far-reaching, creating a “highly secure cloud platform ecosystem.” This is expected to impact “various industries and promote energy transition, digital transformation of agriculture and sustainability.” In addition, the employees of the Ukrainian government and public authorities are to receive a fully networked environment.

Incidentally, Facebook CEO Mark Zuckerberg, who is creating the Metaverse, a kind of virtual reality that will connect more and more areas of life, was photographed with Zelenski. Activist Naomi Klein already had concerns that Corona would allow “Silicon Valley” to create a digital substructure for a global dictatorship. It is quite conceivable that the war in Ukraine will be another springboard for such goals.

To attract further investment to the so-called “Diia City,” it was announced in 2020. This is a digital model for an economic zone with tax benefits for tech corporations. Among the few taxes required by the “Diia City” is a military tax to support the Ukrainian military. High wages are promised about five times higher than the average salary. The goal is to create 450,000 relevant jobs. The aim was to be an “economic model for simplified economic rules” that would form “the basis for the economic transformation of the entire country.” Zelensky fully backed the project. He repeated what he said in Davos: “We want to make Ukraine a global IT hub, a leader in innovation and technology.”

The goal was to attract Ukrainian and international IT companies, high-tech firms, investment funds, startups, and educational groups. The fields to be plowed ranged from agricultural technology to artificial intelligence, drone construction, aircraft and space technology, financial technology, medical neural networks and biotechnology, the advertising industry, trading platforms, the Internet of Things, publishing, blockchain companies, digital outsourcing, the graphics industry, and e-sports companies. In other words, a huge tax-privileged technology park for the “Fourth Industrial Revolution,” in which man and machine merge. The ultimate goal, of course, is the “Internet of the Bodies,” in which, according to WEF’s plan, the collection of “bodily data via a range of devices that can be implanted, swallowed or worn.”

Beginning of the end of cash based on the China model?

The plans are obvious: Ukraine was meant as a Beta Test for the fully networked Great Reset world. The renowned Forbes magazine, for instance, also attested the country to be leading the “digital currency revolution.” This is a double-edged sword: A system that starts as a decentralized attempt to regain financial freedom can quickly become a cashless nightmare. Recall China, for example, where free cryptocurrencies are banned – but the country began working on the digital yuan simultaneously. Currently, Chinese state employees already receive part of their salary as state digital money. In China, people are now even begging for alms with QR codes. Similar plans have long been underway in Europe, as Wochenblick previously reported.

Ukraine being proposed as a hub for the digital market is nothing new either. One lever for this is so-called “non-fungible tokens.” These are digital goods that have a certain equivalent value as unique items. Examples include digital art, music, or unique items in PC games. In theory, however, NFTs can take any popular form as long as it is represented in the blockchain. So in a particularly dystopian future, people could theoretically have to speculate with cryptocurrency for a loaf of bread. Recently, an NFT of a Ukraine flag was sold for $6.75 million to pump that amount of money into the country.

From the digital nightclub to real virtual hell

Digital applications in the Metaverse can take any form – and again, Ukraine is a playground for these ideas. Kyiv-based startup MultiNFT launched its own token-based cryptocurrency a few days ago. So far, the company operates digital nightclubs in the Metaverse, for example. Such venues and events could also be used to support the country in the current conflict and beyond.

What seems like an environment of solidarity now could become an illusory world horror of coexisting interconnected Metaverses in the future. The WEF is already hoping to correct the “system error” of the uncontrolled Internet. Imagine if we all have to enter virtual reality as cyborgs or holograms for important bureaucratic purposes. There would be no easier way to eliminate any dissidents – quite literally. Considering that future possibility, the WEF praise for the “climate goals of the Ukrainian central bank” no longer sounds like a harmless part of the radical transformation…

One thought on “Warning: Ukraine is the Great Reset Laboratory of the Global Tech Elite”