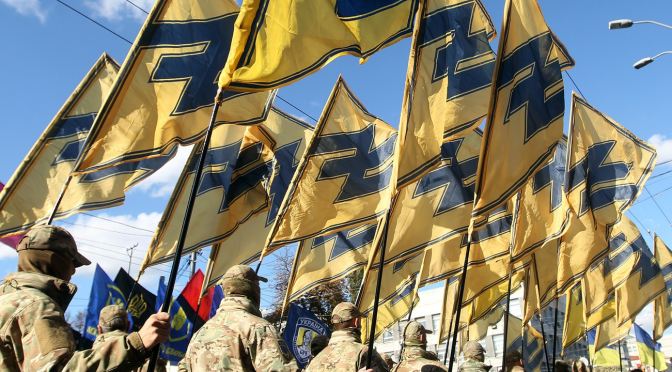 TIME correspondent, Simon Shuster, traveled to Ukraine last summer of 2019 to investigate how white supremacists militias were able to use Facebook to radicalize and recruit people to join their fight.

It was previously reported that Russia insisted one of the reasons for Putin’s attack on Ukraine was to ‘de-militarise and de-Nazify Ukraine.’

When Putin said he would focus on Nazis in Ukraine, he likely knew of the Azov Battalion, although this did not give him an excuse to invade another sovereign nation.

The Gateway Pundit reported on the Azov Battalion previously. Members of this group were recognized at the U.S. Embassy in Ukraine in 2014. The group as we noted, is violent, especially against groups like transvestites, gypsies, and immigrants.

A documentary from TIME magazine in 2019 revealed the existence of a group called Azov that embodied the neo-Nazi and white supremacist ideology led by Andriy Yevhenovych Biletsky in Ukraine.

Andriy Biletsky, a proud white supremacist, claimed that Ukraine’s national purpose was to rid the country of Jews and other inferior races, Fair Observer reported.

A former Marine Corps intelligence officer who served with the United Nations, Scott Ritter, claimed that the first troops trained by US and British soldiers were the neo-Nazi Azov Battalion.

Here’s a background of the Azov battalion, Reuters reported:

So what is the Azov regiment?

Azov is a far-right all-volunteer infantry military unit whose members – estimated at 900 – are ultra-nationalists and accused of harbouring neo-Nazi and white supremacist ideology.

The unit was initially formed as a volunteer group in May 2014 out of the ultra-nationalist Patriot of Ukraine gang, and the neo-Nazi Social National Assembly (SNA) group. Both groups engaged in xenophobic and neo-Nazi ideals and physically assaulted migrants, the Roma community and people opposing their views.

As a battalion, the group fought on the front lines against pro-Russian separatists in Donetsk, the eastern region of Ukraine. Just before launching the invasion, Putin recognised the independence of two rebel-held regions from Donbas.

A few months after recapturing the strategic port city of Mariupol from the Russian-backed separatists, the unit was officially integrated into the National Guard of Ukraine on November 12, 2014, and exacted high praise from then-President Petro Poroshenko.

What has been the international response to Azov?

In June 2015, both Canada and the United States announced that their own forces will not support or train the Azov regiment, citing its neo-Nazi connections.

The following year, however, the US lifted the ban under pressure from the Pentagon.

In October 2019, 40 members of the US Congress led by Representative Max Rose signed a letter unsuccessfully calling for the US State Department to designate Azov as a “foreign terrorist organisation” (FTO). Last April, Representative Elissa Slotkin repeated the request – which included other white supremacist groups – to the Biden administration.

Transnational support for Azov has been wide, and Ukraine has emerged as a new hub for the far right across the world. Men from across three continents have been documented to join the Azov training units in order to seek combat experience and engage in similar ideology.

In 2016, Facebook first designated the Azov regiment a “dangerous organisation”.

Under the company’s Dangerous Individuals and Organizations policy, Azov was banned from its platforms in 2019. The group was placed under Facebook’s Tier 1 designation, which includes groups such as the Ku Klux Klan and ISIL (ISIS). Users engaging in praise, support or representation of Tier 1 groups are also banned.

However, on February 24, the day Russia launched its invasion, Facebook reversed its ban, saying it would allow praise for Azov.

“For the time being, we are making a narrow exception for praise of the Azov regiment strictly in the context of defending Ukraine, or in their role as part of the Ukraine national guard,” a spokesperson from Facebook’s parent company, Meta, told Business Insider.

According to TIME magazine’s documentary published in 2021, “Azov is much more than a militia. It has its own political party” who worked hand in hand with the Ukrainian armed forces.

Its fighters resemble the other para-military units—and there are dozens of them—that have helped defend Ukraine against the Russian military over the past six years. But Azov is much more than a militia. It has its own political party; two publishing houses; summer camps for children; and a vigilante force known as the National Militia, which patrols the streets of Ukrainian cities alongside the police. Unlike its ideological peers in the U.S. and Europe, it also has a military wing with at least two training bases and a vast arsenal of weapons, from drones and armored vehicles to artillery pieces.

Outside Ukraine, Azov occupies a central role in a network of extremist groups stretching from California across Europe to New Zealand, according to law enforcement officials on three continents. And it acts as a magnet for young men eager for combat experience. Ali Soufan, a security consultant and former FBI agent who has studied Azov, estimates that more than 17,000 foreign fighters have come to Ukraine over the past six years from 50 countries.

The vast majority have no apparent links to far-right ideology. But as Soufan looked into the recruitment methods of Ukraine’s more radical militias, he found an alarming pattern. It reminded him of Afghanistan in the 1990s, after Soviet forces withdrew and the U.S. failed to fill the security vacuum. “Pretty soon the extremists took over. The Taliban was in charge. And we did not wake up until 9/11,” Soufan tells TIME. “This is the parallel now with Ukraine.”