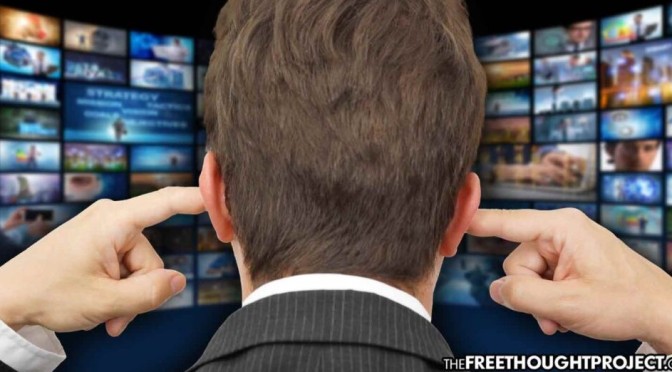 As we have been reporting for the last three weeks, the Russian invasion of Ukraine is horrific. Russian president Vladimir Putin is a thug who is committing war crimes and who is killing innocent Ukrainians while endangering the people of Russia — all the while threatening nuclear war. While this war is not near American soil, because of the United States’ involvement in NATO and its relationship with Ukraine, it most certainly affects all Americans.

US sanctions on Russia have helped to drive oil prices up nearly 50 percent since this conflict began, which is undoubtedly going to drive up the cost of literally everything else.

These things most assuredly affect the lives of millions of Americans and this war deserves coverage in the media. That being said, given the track record of US media, and their tendency to deceive the American public to get them to accept wars for profit, we shouldn’t be so quick to let down our guard and unquestioningly absorb the constant barrage of information coming from them.

If the mainstream media was so concerned about wars and illegal invasions why don’t they ever report on the genocide in Yemen which is being aided by the United States or any of the other places the US has invaded over the years? The corporate press is actively avoiding these conflicts while conveniently using the Ukraine crisis as a means of ignoring other very important stories that also affect your life.

We have compiled a list of five of these stories to make sure they don’t get lost in the constant barrage of war propaganda from the mainstream.

According to FOIA documents obtained by the Blaze, the current administration paid the whole of corporate media, including the so-called “conservative” outlets, a billion of your tax dollars to carry out a massive campaign to push positive information about the COVID-19 vaccines.

The breach of journalistic integrity in this scheme cannot be overstated. While the average American thought they were consuming “unbiased” media reports, they were actually part of a paid propaganda campaign to convince them to take the vaccine.

As The Blaze points out, “though virtually all of these newsrooms produced stories covering the COVID-19 vaccines, the taxpayer dollars flowing to their companies were not disclosed to audiences in news reports, since common practice dictates that editorial teams operate independently of media advertising departments and news teams felt no need to make the disclosure, as some publications reached for comment explained.”

2. Pfizer Data was Quietly Released Listing Well Over 1,200 Adverse Side Effects from the Covid Jab

While the mainstream media incessantly reported on all things Ukraine over the last several weeks, literally all of the major outlets have refused to report on the release of Pfizer’s data.

In January, after the FDA and Pfizer received massive backlash for delaying the release of vaccine data for 75 years, U.S. District Judge Mark T. Pittman ordered the agency to turn over 55,000 pages of vaccine trial data every month. On March 1, that first release came and not a single mainstream outlet reported on it.

In that 55,000-page set of documents released last week, the FDA’s Center for Biologics Evaluation and Research allowed the public to access data for the first time that Pfizer submitted to the FDA from its clinical trials in support of a COVID-19 “vaccine” license. Hidden in one appendix is a 38-page report of clinical data for Pfizer’s “vaccine” which lists a massive array of 1,291 alleged adverse side effects from the shot.

“At least now we know why the FDA and Pfizer wanted to keep this data under wraps for 75 years. These findings should put an immediate end to the Pfizer Covid vaccines. The potential for serious harm is clear, and those injured by the vaccines are prohibited from suing Pfizer for damages….”

As the rest of the country began following actual science, the People’s Republic of California maintained their covid tyranny for the peasant class. While politicians and celebrities openly flaunted the mandates they wrote and shilled for, the general public, including children, were forced to obey.

One preschool company in San Diego, however, said enough was enough and made masks optional for their students. While other schools were muzzling their children in defiance of science, Aspen Leaf openly told parents that masks were optional. As a result, state agents with the California Department of Social Services raided all three locations simultaneously — as if they were trafficking children, not freeing them from cloth face coverings.

Despite clear laws on the books about interviewing children without parental consent, CDSS questioned children aged 1-4 without their parents.

“This gross abuse of power is shameful and unacceptable for many reasons,” Stephanie and Richard Rosado wrote in a complaint about their 4-year-old being interrogated, according to the Voice. “The people who ordered this to be done and those who participated should be held responsible.”

As Gov’t Sends Billions to Ukraine, Millions of US Children are Being Pushed into Horrible Poverty

On Thursday, the House and Senate approved a bill to send $14 billion to the Ukraine, most of which will go toward weapons.

With moves like this, it is no surprise that the stock market associated with the military industrial complex is booming as the rest of the market plummets. What’s more, as the politically elite send billions to the other side of the world, 3.7 million children have been pushed into poverty here at home.

According to a recently released Columbia University report, by late January 3.7 million U.S. children were plunged back into poverty, as the government ended the child tax credit.

While the child tax credit is a band-aid to a much larger problem, it was helping millions of children yet it is a drop in the bucket on what the US spends on war every year. And now, instead of helping starving American children, the war hawks are asking for more money for war.

As the US government sends billions of your tax dollars to Ukraine to put weapons in their hands, that same government is working overtime back home to take weapons out of yours. There will be no vote in Congress and you will have no say in the matter. Instead, Biden is ruling by executive decree.

Biden’s first Executive Order will criminalize popular pistol braces. As it stands, roughly 40 million Americans use these devices to stabilize their firearms.

The second EO being rammed through by the Biden administration will force citizens to register their “80 percent lowers.” Officially called a “receiver blank” by the ATF, an 80% lower is an unfinished receiver that isn’t considered a firearm until the purchaser finishes it at home. Biden likes to call these “ghost guns” to scare folks but they are really just modifications for most people who like to tweak their firearms.

Under these two executive orders, millions of gun owners will also be turned into felons overnight.

So, as stated above, the Russian invasion of Ukraine is most assuredly an important issue but we must remain resilient when consuming information. As the above stories illustrate, the sleight of hand tactics by the corporate press are in full swing, which is why independent media is so important. It is also why we are constantly under attack from those who wish to control the narrative.

If you’d like to help us in the battle against constant censorship and demonetization, please consider becoming a member of the Free Thought Project by signing up for one of our member packages offering free schwag and other perks. You can do so by clicking here.