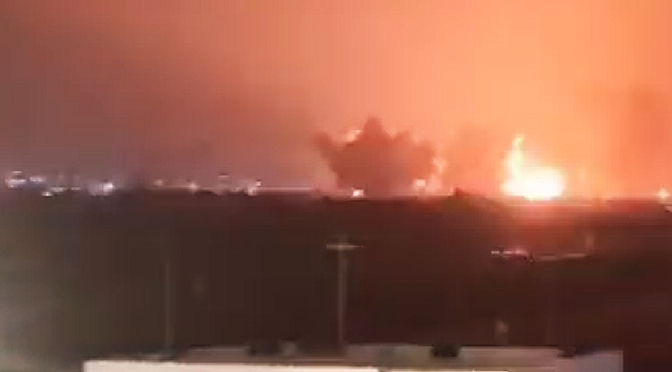 A number of missiles were fired towards the US consulate in Erbil in northwestern Iraq on Saturday night, according to the Iraqi News Agency (INA).

The governor of Erbil, Omed Khoshnaw, stated that multiple missiles fell in the area, saying it was unclear whether the target was the US consulate or the airport in the city. According to INA, five explosions were heard in the attack.

Independent open-source intelligence (OSINT) accounts shared videos reportedly shared by Iranian civilians showing missiles being fired from Iran at the time of the attack, with at least one of the videos being geolocated to a site in Khasabad in the East Azerbaijan province of Iran.

Videos shared on social media reportedly from the scene showed multiple large explosions in the area.

According to Kurdistan 24 reporter Barzan Sadiq, the Kurdistan 24 studio in the area was reportedly damaged in the attack as well.

Shiite cleric and Iraqi politician Muqtada al-Sadr responded with outrage to the missile attack, tweeting shortly after the attack “In the name of God, Irbil is under the fire of loss and betrayal, and under pain of starvation, as if the Kurds were not Iraqis. Rather, they are the lung of Iraq and its indivisible part.”

“Erbil will not kneel except for moderation, independence and sovereignty.  Peace and love for you, Erbil, and you Kurds, and patience until the achievement of: #National_Majority_Government,” tweeted al-Sadr.

Prime minister of the Kurdistan Region, Masrour Barzani, responded to the attack on Saturday night, writing “Erbil does not bow to cowards. I strongly condemn the terrorist attack on parts of Erbil and call on the brave and patient people of Erbil to be patient and to follow the instructions of the security agencies. I thank you for your patience.”

The missile attack came as negotiations to return to the JCPOA nuclear deal with Iran stalled in Vienna.

EU foreign policy chief Josep Borrell tweeted on Friday that the talks in Vienna needed a “pause,” due to “external factors.” Borrell added that a final text is “essentially ready and on the table.”

Iranian foreign ministry spokesman Saeed Khatibzadeh stated on Saturday that there were at least one or two key issues that the US and Iran had not yet reached an agreement on. He added that the two states disagree on how sanctions should be lifted, with Iran wanting more sectors released from sanctions and the US wanting less.

Iranian officials stated that it is unclear when negotiations will resume.

No party has taken responsibility for the missile fire as of yet. Iran has threatened retaliation in recent days for the deaths of two Islamic Revolutionary Guard Corps (IRGC) officers in an alleged Israeli airstrike in Syria last week.

Iran-backed militias reportedly targeted the Al-Tanf base, where US forces are housed, in October in retaliation for an alleged Israeli airstrikes which targeted Iranian-backed forces in Syria last year.

This is a developing story.