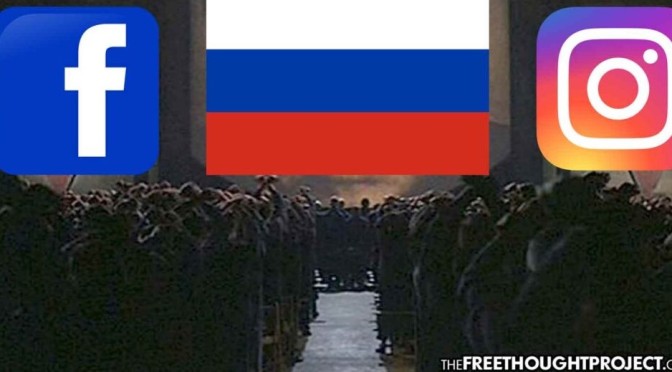 Over the last 6 years, Facebook, now Meta, has clamped down on any and all calls for violence by users on its platform. Users who advocated for violence were banned and some of them were reported to authorities in the company’s attempt to make its platform a more peaceful place. But all that has changed now as the world slips into a scene from George Orwell’s dystopian novel, 1984.

On Thursday night, Reuters reported that Meta Platforms will now allow Facebook and Instagram users in some countries to call for violence against Russians in what they refer to as a “temporary change to its hate speech policy.”

Users can now openly advocate for the assassination of world leaders, so long as they are considered political enemies of the West. Russian President Vladimir Putin and Belarusian President Alexander Lukashenko are fair game in Meta’s new world.

“As a result of the Russian invasion of Ukraine we have temporarily made allowances for forms of political expression that would normally violate our rules like violent speech such as ‘death to the Russian invaders.’ We still won’t allow credible calls for violence against Russian civilians,” Meta spokesperson Andy Stone said in a statement.

If the user gets too detailed about how and where they are going to kill these Russians, only then will Facebook and Instagram draw the line.

Citing the Reuters story, Russia’s US embassy demanded that Washington stop the “extremist activities” of Meta allowing its users to call for violence.

“Users of Facebook & Instagram did not give the owners of these platforms the right to determine the criteria of truth and pit nations against each other,” the embassy said on Twitter Thursday night in response to the change.

☝️We demand that 🇺🇸 authorities stop the extremist activities of @Meta, take measures to bring the perpetrators to justice. Users of #Facebook & #Instagram did not give the owners of these platforms the right to determine the criteria of truth and pit nations against each other. https://t.co/1RkrjRmEtA pic.twitter.com/sTacSm4nDt

“We are issuing a spirit-of-the-policy allowance to allow T1 violent speech that would otherwise be removed under the Hate Speech policy when: (a) targeting Russian soldiers, EXCEPT prisoners of war, or (b) targeting Russians where it’s clear that the context is the Russian invasion of Ukraine (e.g., content mentions the invasion, self-defense, etc.),” it said in the email.

Anyone who has read Orwell’s 1984 should see a familiar theme with this move by Facebook — it’s called Two Minutes Hate. Two Minutes Hate was a daily public ritual in the novel during which members of the Outer Party of Oceania must watch a film depicting the enemies of the state and openly and loudly express hatred for them.

The horrible thing about the Two Minutes Hate was not that one was obliged to act a part, but, on the contrary, that it was impossible to avoid joining in. Within thirty seconds any pretence was always unnecessary. A hideous ecstasy of fear and vindictiveness, a desire to kill, to torture, to smash faces in with a sledge-hammer, seemed to flow through the whole group of people like an electric current, turning one even against one’s will into a grimacing, screaming lunatic. And yet the rage that one felt was an abstract, undirected emotion which could be switched from one object to another like the flame of a blowlamp.

No other political speech is allowed except for hatred of those who oppose the party. As Orwell explained, in re-directing the members’ subconscious feelings away from the Party’s government of Oceania, and towards non-existent external enemies, the Party minimizes thoughtcrime and the consequent, subversive behaviors of thought criminals.

If the masses direct their hatred and fear toward a single enemy, Vladimir Putin and Russians, then they will be unconcerned with the atrocities carried out by their own governments.

Instead of Putin, Emmanuel Goldstein — the principal enemy of the people of Oceania — is the target of the hatred and calls for violence for the two-minute period. He is seen and heard on the “telescreen” during the Ministry of Truth’s propaganda display.

Just as anyone who questioned the party in 1984 was associated with Goldstein, we are seeing the same scenario play out with Russia. If you do not parrot the establishment’s talking points on Ukraine, you are a puppet of Putin and worthy of hate and disdain.

The foresight by Orwell is uncanny and should be an indicator that Western society is slipping into dark times.

Yes, Vladimir Putin is a tyrant, thug, criminal, who is committing mass murder and deserves your scorn and ire. This war is horrific and he bears the brunt of the responsibility.

However, when hatred and violence are condoned and sanctioned by the largest social media network in the world — with a sordid track record of manipulating its users — you should begin to question your reality.

We cannot be so blinded by fear that we are willing to relinquish control of our emotions to known liars and manipulators, simply because they encourage it by allowing it. As Orwell warns us, this fear will consume you. We have to do better.

If humanity is no better than easily steered blind hatred for our fellow humans, then what’s left that’s worth fighting for?