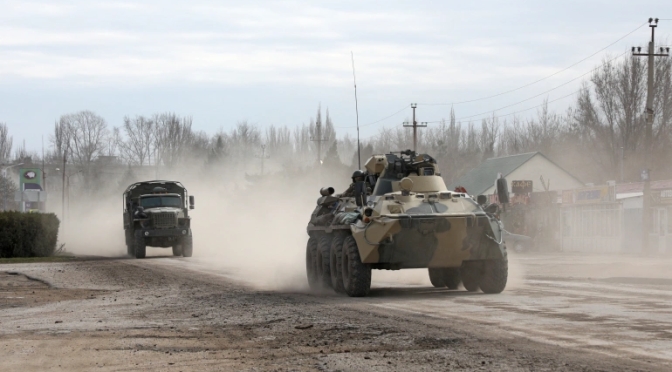 Authors Note:  There is, of course, the surface-level explanation of what is happening in Ukraine right now; which will be altered depending on who you ask or what pundit you are listening to. If history is any indicator, there are always deeper reasons for these events on the world stage that the general public is often kept in the dark about for obvious reasons. In this article, we are going to compile as many details as we can about what is happening in Ukraine and leave it to the reader to decide what they believe (IE what real journalism is supposed to do). It should also be noted that certain portions of this report contain the author’s opinion.

Late Wednesday night, Vladimir Putin declared a Russian military operation against Ukraine. Immediately after the public address, Russian forces launched an attack on several locations, causing explosions across the country and including the Capitol of Kyiv. Throughout the evening and early hours, cruise and ballistic missiles hit certain strategic points including airports and military bases.

As per Ukrainian Aeroflap News:

“According to the Armed Forces of Ukraine, the following airports/airbases were damaged by missiles: Boryspil (Kyiv), Chuguev/Chuhuiv (Kharkiv), Kramatorsk (Donetsk), Kherson, Kulbakino (Nikolaev, east of Odessa) and Ozerne (Zhytomyr).

The interest of doing damage early on in attacks is to prevent an air offensive against Russian forces on the ground or in the air. At the same time, with calculated and GPS-guided attacks, Russia manages to destroy the Ukrainian defense arsenal with weapons, fighters, aircraft, radar, missiles and anti-missile systems.”

Several videos surfaced in the wake of the attacks:

And then of course you had the stalwarts at CNN:

Another clip here shows the Ukrainian Military base at Kulbakinko’s runway destroyed by a Russian ballistics missile attack.

In one striking video, a group of individuals is seen fleeing the Ivano-Frankivsk International Airport when a cruise missile speeds on screen and strikes the building behind them:

The Russian forces were even able to hit several of Ukraine’s key military infrastructures, including military warehouses that held hoards of ammunition.

And then we have a clip of actual combat:

This morning brought its own slew of footage

Video footage caught in the early hours a massive exodus of civilians from Ukraine’s capital.

The Biden team, who some claim is hell-bent on destroying the USA, is now ending the program that Trump put in place to protect the US from China. The timing is impeccable considering that his weakness provoked Russia and an even bigger threat is postering to take Taiwan.

As per Fox News:

The Department of Justice announced Wednesday that it is ending its “China Initiative” program that was aimed at preventing spying by the Chinese Communist Party, and launching a new, “broader approach.”

The China Initiative was started in 2018 under the Trump administration to protect U.S. national security against Chinese spying on U.S. intellectual property and in academia. The DOJ website said it was aimed at “identifying and prosecuting those engaged in trade secret theft, hacking, and economic espionage,” as well as “protecting our critical infrastructure against external threats through foreign direct investment and supply chain compromises.”

That program is coming to an end. In its place, the DOJ is instituting a new “Strategy for Countering Nation-State Threats.”

“Our goal with this strategy is to take a comprehensive approach that draws on the full extent of our tools and authorities to address the alarming rise in illegal activity from hostile nations,” Assistant Attorney General Matthew Olsen of the DOJ’s National Security Division said. “This includes growing threats within the United States and to Americans and U.S. businesses abroad.”

(Note that Ukraine is not currently a member of NATO.)

Ben Harnwell on Steve Bannon’s War Room claimed that there are no NATO troops in Ukraine and no plans to deploy them. Of course that is subject to change. After Harnell reported this, The head of NATO, Secretary General Jens Stoltenberg, responded to questions regarding the situation in Ukraine.  The AP reported:

NATO Secretary-General Jens Stoltenberg warned Thursday that the military alliance would defend every inch of its territory should Russia attack a member country, as he slammed Moscow for launching a brutal act of war on Ukraine.

Russia launched a wide-ranging attack on its neighbor, hitting cities and bases with airstrikes or shelling. Ukraine’s government said Russian tanks and troops rolled across the border and accused Moscow of unleashing a “full-scale war.”

Speaking after chairing an emergency meeting of NATO envoys, Stoltenberg said the 30-nation security alliance will continue to beef up its defenses on its eastern flank near Ukraine and Russia. He said U.S. President Joe Biden and his NATO counterparts will hold an online summit on Friday.

“Russia has attacked Ukraine. This is a brutal act of war. Our thoughts are with the brave people of Ukraine,” Stoltenberg told reporters. “Peace in our continent has been shattered. We now have war in Europe, on a scale and of a type we thought belong to history.”

You can watch a portion of his remarks here:

The EU has said that they will block western asseste, and promised heavy targeted sanctions.

Some people view this attack as an extension of what happened last August with the bungled withdrawal from Afghanistan, projecting our leaders’ weakness for the wolves of the world to see. President Donald Trump offered his perspective moments after the initial attack (well before the world heard anything from our current president).

Then you have establishment RINO and career politician Mitt Romney blaming this all on the “shortsightedness” of Donald Trump’s America First policies.

He released a statement on Twitter last night not long after Russia invaded Ukraine.

Naturally, Beijing sees this as an opportunity.

Taiwan, which China claims as its own territory, has complained of regular such missions by the Chinese air force over the last two years, though the aircraft do not get close to Taiwan itself.

The number of aircraft involved was well off the last large-scale incursion, 39 Chinese aircraft on January 23, and since then, such fly-bys have been sporadic with far fewer aircraft.

The ministry said the latest mission involved eight Chinese J-16 fighters and one Y-8 reconnaissance aircraft, which flew over an area to the northeast of the Taiwan-controlled Pratas Islands at the top end of the South China Sea.

There seems to be a lot of individuals sharing their perspectives on the situation, and while their experiences are subjective, counter to the western narrative, and in some cases could be potential Russian Propaganda, the news is meant to be shared not withheld.

Consider this, if Russia decided to install a dictatorship or formed a military alliance in Mexico where they ran all kinds of shady money laundering activities and flooded the country with weaponry, would it be unreasonable for the US to be concerned about this sort of thing or should we just acknowledge their sovereign right to do so? Does the political elite, who have collectively had their hands in the Ukraine cookie-jar for years, only rush to outrage over Ukraine out of a sense of genuine compassion or is it something more personal?

We are not trying to let Russia off of the hook, rather trying to paint a broader, more nuanced picture of what the situation looks like from all perspectives.

We pray for the people of Ukraine who are caught in the crossfire, and for a swift resolution to the fighting.