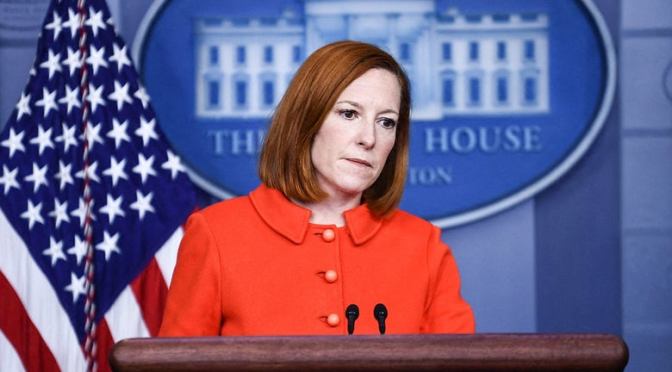 Although the White House transition from Donald Trump to Joe Biden in January 2021 didn’t exactly follow tradition, there was a bit of a passing of the torch from the 45th to the 46th president.

Trump left a letter for Biden, and during an interview on Friday, White House press secretary Jen Psaki shared some details about it from behind the scenes.

According to Psaki, she was the one who first informed Biden he had been left a letter from his predecessor.

“On my first day before I did my first briefing, I was in the Oval Office talking with him about the briefing and anything he wanted me to convey or what I expected or whatever. And I said, ‘You know, I think you’re going to be asked about the letter that the former president left you,’ and he said, ‘Oh, did he leave me a letter?’” she told actor Rob Lowe on his “Literally! With Rob Lowe” podcast.

“So he kind of looked around for the letter and read the letter while I was sitting there, which was just kind of a remarkable moment.”

According to Mediaite, Biden has not shared any details regarding the letter’s contents except to say that they were “generous.”

Psaki said she doesn’t know what was in the letter but nevertheless recalled it very clearly as one of her “early memories” in the White House.

“He didn’t read it out loud. He read it to himself,” she said of Biden. “And he is such a classy guy, whether people agree with his politics or not, that he didn’t even convey it to us in that moment of what the letter said, he kind of read the letter, consumed it himself.”

Psaki also told Lowe that the former president’s handwriting was “lovely” and his letter was “very long.”

It’s possible that the letter was not nice, eloquent or even well-wishing.

But if so, it seems unlikely the Biden administration would have kept the letter a secret.

This article appeared originally on The Western Journal.