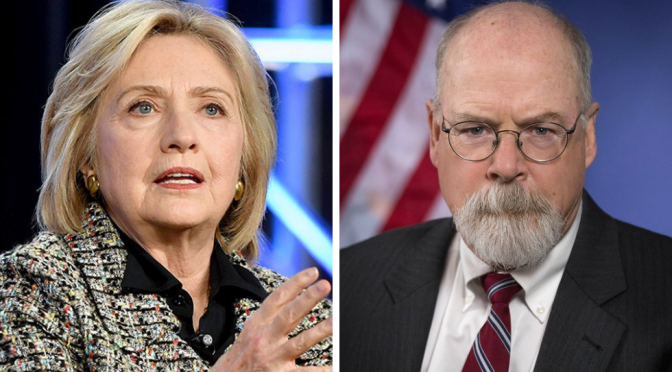 Lawyers for former Hillary Clinton campaign attorney Michael Sussman, who has been charged in John Durham’s probe into the origins of the ‘Russiagate’ investigation, are demanding the court “strike” a “factual background” segment of the special counsel’s most recent filing because they claim it will “taint the jury pool.”

The Sussmann motion comes on the heels of a bombshell filing late last week by Durham that honed in on potential conflicts of interest in relation to the former Clinton attorney’s representation after he has been charged with making a false statement to a federal investigator.

Sussmann has pleaded not guilty to the charge.

“Unfortunately, the Special Counsel has done more than simply file a document identifying potential conflicts of interest,” Sussmann’s attorneys wrote. “Rather, the Special Counsel has again made a filing in this case that unnecessarily includes prejudicial—and false—allegations that are irrelevant to his Motion and to the charged offense, and are plainly intended to politicize this case, inflame media coverage, and taint the jury pool.

“Sadly, the Special Counsel seems to be succeeding in his effort to instigate unfair and prejudicial media coverage of Mr. Sussmann’s case,” Sussmann’s attorneys added, according to Fox News.

The Clinton attorney’s legal team also called on the court to “strike the Factual Background portion of the Special Counsel’s motion pursuant to the Court’s inherent power to ‘fashion an appropriate sanction for conduct which abuses the judicial process.’”

Durham’s indictment against Sussmann, says he told then-FBI General Counsel James Baker in September 2016, less than two months before the 2016 presidential election, that he was not doing work “for any client” when he requested and held a meeting in which he presented “purported data and ‘white papers’ that allegedly demonstrated a covert communications channel” between the Trump Organization and Alfa Bank, which has ties to the Kremlin.

But Durham’s Feb. 11 filing alleged that lawyers from Hillary Clinton’s presidential campaign in 2016 had paid to infiltrate servers belonging to Trump Tower and later the White House, in order to establish an “inference” and “narrative” to bring to federal government agencies linking Donald Trump to Russia.

In the February 11 filing in a section titled “Factual Background,” Durham said that Sussmann “had assembled and conveyed the allegations to the FBI on behalf of at least two specific clients, including a technology executive (Tech Executive 1) at a U.S.-based internet company (Internet Company 1) and the Clinton campaign.”

It also alleged that Sussmann’s “billing records reflect” that he “repeatedly billed the Clinton Campaign for his work on the Russian Bank-1 allegations.”

The filing showed that the Tech Executive and Sussmann met and talked to another law partner, who was serving as General Counsel to the Clinton campaign. That attorney, sources said, is Marc Elias, who worked at the law firm Perkins Coie.

The Perkins Coie firm was used by the Democratic National Committee and the 2016 Clinton campaign as the go-between to fund the debunked anti-Trump “Steele dossier.” The dossier was commissioned by Fusion GPS, an opposition research firm.

Durham’s filing states that in July 2016, the tech executive worked with Sussman, a U.S. investigative firm retained by Law Firm 1 on behalf of the Clinton campaign, numerous cyber researchers and employees at multiple internet companies to “assemble the purported data and white papers.”

“In connection with these efforts, Tech Executive-1 exploited his access to non-public and/or proprietary Internet data,” the filing said. “Tech Executive-1 also enlisted the assistance of researchers at a U.S.-based university who were receiving and analyzing large amounts of Internet data in connection with a pending federal government cybersecurity research contract.”

“Tech Executive-1 tasked these researchers to mine Internet data to establish ‘an inference’ and ‘narrative’ tying then-candidate Trump to Russia,” Durham said. “In doing so, Tech Executive-1 indicated that he was seeking to please certain ‘VIPs,’ referring to individuals at Law Firm-1 and the Clinton campaign.”