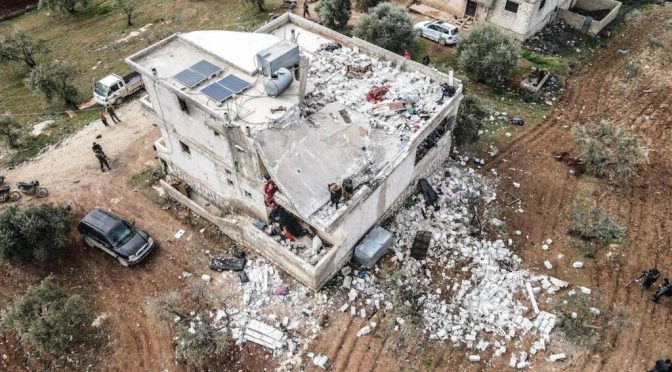 A major special forces raid believed part of a mission to kill or capture terrorists happened overnight in al-Qaeda held Idlib province of northwest Syria. Eyewitnesses observed helicopter gunships and jets active in the area of the village of Atmeh near the Turkish border for over two hours, including gunfire on the ground, in what’s being called the biggest such raid since the 2019 killing of Islamic State leader Abu Bakr al-Baghdadi.

Despite Pentagon spokesman John Kirby hailing the mission as “successful” in an early Thursday statement, citing “no US casualties” – already international reports are saying multiple civilians were killed in what’s already looking like a botched raid.

“U.S. special forces carried out what the Pentagon said was a large-scale counterterrorism raid in northwestern Syria early Thursday. First responders at the scene reported 13 people were killed, including six children and four women,” The Associated Press reports.

“Residents said helicopters flew overhead and U.S. forces clashed with gunmen for more than two hours around a two-story house surrounded by olive trees,” AP detailes. “They described continuous gunfire and explosions that jolted the sleepy village of Atmeh near the Turkish border, an area dotted with camps for internally displaced people from Syria’s civil war.”

Initially there was speculation that it could be connected with last month’s large-scale ISIS prison break from a Kurdish SDF guarded facility in northeast Hasakeh province. It led to over 120 US-backed SDF members killed after two weeks of running battles in the area of the prison, with possibly a few hundred ISIS terrorists having escaped.

As soon as last night’s Idlib operation commenced, it involved overwhelming American firepower, but with reports of resistance from militants on the ground. “A journalist on assignment for The Associated Press and several residents said they saw body parts scattered near the site of the raid, a house in Syria’s rebel-held Idlib province,” AP continues.

Further, some sources suggest that US commandos were after Baghdadi’s successor:

An Iraqi intelligence official in contact with the U.S.-led coalition said Thursday’s target was a high-ranking militant leader whose identity will be released by the White House later in the day. Information suggests he may be al-Baghdadi’s successor, the current IS leader known as Abu Ibrahim al-Hashimi al-Qurayshi, the official added. He spoke on condition of anonymity to divulge sensitive information.

Biden’s statement says the Islamic State commander has been “taken off the battlefield” – presumably killed. But that many civilians were slaughtered in the process will be a major area of scrutiny as the administration attempts to cast this as a “successful mission”.

It proves further embarrassing for Turkey, given it directly backs the main Islamist factions in Idlib, which has become a terror safe-haven. It must also be recalled that the CIA and allied intelligence services actually helped Islamic fighters – included al-Qaeda in Syria – capture Idlib from Syrian government forces in the first place in 2015.

Local journalists and monitors who reportedly visited the location of the raid observed the following: “The top floor of the house was almost totally destroyed in Thursday’s raid, with the ceiling and walls knocked out.” Some photographs of the aftermath have been published to Al Jazeera.

“Blood could be seen on the walls and floor of the remaining structure, which contained a wrecked bedroom with a child’s wooden crib on the floor,” the AP report notes. “On one damaged wall, a blue plastic children’s swing was still hanging. The kitchen was blackened with fire damage.”