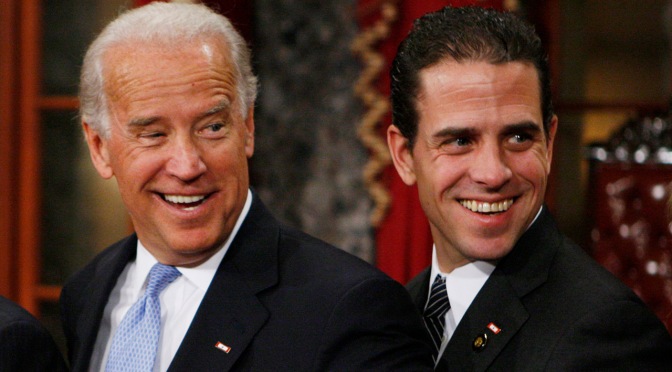 Among the boldest and eye-brow-raising political moves by embattled Kazakh President Kassym-Jomart Tokayev within the past days that grabbed international headlines was his ordering the arrest of Kazakhstan’s powerful former intelligence chief, Karim Massimov, on the charge of high treason.

Indicating that amid widespread fuel price unrest which quickly became aimed squarely at toppling Tokayav’s rule there’s a simultaneous power struggle within the government, Massimov had headed the National Security Committee (KNB) up until his Thursday sudden removal and detention. Massimov had served as the prior longtime strongman ruler Nursultan Nazarbayev’s prime minister and has long been considered his “right-hand man”. Shortly after, a photo has resurfaced, currently subject of widespread speculation which shows Joe Biden and Hunter Biden posing with the now detained Kazakh security chief Karim Massimov, along with well-connected oligarch Kenes Rakishev.

Further an email and communications have surfaced, previously subject of extensive reporting in The Daily Mail, and related to prior extensive commentary and questions concerning Hunter’s ‘laptop from hell’ – that appears to confirm that Hunter Biden and Massimov were “close friends”.  Reporting at the time indicated that “when Biden was vice president, Hunter worked as a go-between between for Rakishev from 2012 until 2014. And further the emails were from “anti-corruption campaigners” in Kazakhstan showing that Hunter made contact with Rakishev. And more: “Per the report, Hunter successfully got a $1million investment from Rakishev to a politically-connected filmmaker.”

According to a 2020 article in The New York Post written when the photo first began gaining attention among Western pundits, “The snap, first published by a Kazakhstani anti-corruption website in 2019, follows last week’s bombshell Post exposés detailing Hunter Biden’s overseas business dealings and a report claiming Rakishev paid the Biden scion as a go-between to broker US investments.” Concerning his relationship with Kazakh oligarchs and power-brokers, the NYPost story had detailed further:

…Hunter Biden’s alleged work with Rakishev, claiming he dined regularly with the Kazakh businessman and attempted to facilitate investment for his cash in New York, Washington, DC, and a Nevada mining company.

But Rakishev, who enjoys close ties to Kazakhstan’s kleptocratic former president, reportedly ran into trouble when Western business partners realized that the opaque origins of his reported $300 million fortune could become a “liability,” the Mail reported.

This brings up a slew of questions, starting with: What is the nature of the ties between the Biden family and Kazakhstan’s kleptocratic former president and his circle of oligarchs and powerful security officials?

Serious questions arise as the country is still on fire and Russia has sent some 3,000 peacekeeping troops in an attempt to reign in the spiraling security situation, which appears vital to Russia’s interests.

Earlier we featured the analysis of attorney and geopolitical commentator Clint Ehrlich, who argues that both this past week’s unrest and the Hunter Biden connection means Kazakhstan’s destabilization is a much bigger deal than Western media is letting on.

The detention of Karim Massimov was announced by the body he headed until his removal this week. The nature of the attempted revolution is coming into focus. Kazakh security forces have arrested the country’s former security chief, Karim Massimov, for treason. Massimov was considered the right-hand man of the country’s former president, Nazarbayev.

That’s also Massimov standing on the right, next to Joe Biden and Hunter Biden. They had a controversial meeting, unmasked by anti-corruption activists inside Kazakhstan. It’s awkward for the U.S. President to be linked to the man accused of heading an anti-Russian uprising.

But we’re getting ahead of ourselves. The Biden connection is only one volatile detail of what is going on inside Kazakhstan and what it means for the world. To get a clearer picture, we need to examine Massimov’s broader role inside the country’s power structure.

Nazarbayev ruled Kazakhstan for 28 years, from the collapse of the Soviet Union until his resignation as President in 2019. Before this crisis, many thought he was still in control of the country, since he retained his position as Chairman of the Security Council. When Nazarbayev stepped down as President, Massimov likely had ambitions to be his replacement. After all, he’d been his Chief of Staff, and he’d twice been his Prime Minister.

But there was one huge problem: Massimov was only 1/2 ethnically Kazakh. Nazarbayev passed him over and instead made the current President, Toyakev, his handpicked successor. So it was a shock when, 2 days ago, Toyakev removed Nazarbayev from his position as Chairman of the Security Council.

The big question was: Did Tokayev take that step at Nazarbayev’s request, so that Nazarbayev would not be blamed if security forces shot protesters? Or was the removal the sign of a rift between Tokayev and Nazarbayev?

The firing of Massimov from his role as Security Chief, and his subsequent arrest for treason, deepens the mystery. There are two major possibilities.

Many outside commentators have argued that, because there appears to be a “palace coup,” the possibility of a “color revolution” can be excluded. They are severely wrong, first as a matter of substance, second as one of perception.

Substantively, color revolutions *ALWAYS* involve the active collaboration of one faction of a country’s elite. Recall the famous audio of Victoria Nuland weighing in on which members of Ukraine’s elite should compose its post-revolutionary government.

Also, even if no true “color revolution” was attempted in Kazakhstan (and that is highly debatable), it will be in the interest of Russia to push that narrative. Specifically, a foreign attack on Kazakhstan is necessary to make the CSTO-led intervention lawful. The fact that the accused leader of the “color revolution” (or, at least, one of the major conspirators) has been connected to President Biden is therefore a veritable gift to Russia.

The script writes itself to blame the U.S., true or false.

Whether the West actually instigated the crisis is quickly becoming irrelevant. The US response to Russia’s intervention is already fraying bilateral relations, making it harder to imagine a positive outcome in upcoming talks to resolve the Ukraine standoff.

“[O]ne lesson in recent history is that once Russians are in your house, it’s sometimes very difficult to get them to leave.”

This comment was infuriating to Russia. The Foreign Ministry responded:

“If Anthony Blinken loves history lessons so much, then he should take the following into account: when Americans are in your house, it can be difficult to stay alive and not be robbed or raped.”

To say the least, this is not the tone that one would want between the world’s two superpowers heading into the most important negotiations since the end of the Cold War. A security showdown over Ukraine is looming, and our countries are trading insults. Many in Western media hoped that the crisis in Kazakhstan would resolve the Ukraine situation indirectly.

They believed that, if Russia intervened in Kazakhstan, it might not have enough troops to take action in Ukraine. Those hopes are rapidly being dashed. The force of 3,000 paratroopers and special forces that Russia has deployed to Kazakhstan already appears to have brought stability to the country.

This was a matter of signaling: Kazakh forces will no longer desert, knowing Russia has picked sides. It was largely predictable, given that the mere threat of Russian intervention in Belarus was enough to effectively put down the uprising against Lukashenko. The same game plan appears to be working in Kazakhstan, albeit in a more aggressive form.

The end result is that Russia finds itself with more than enough troops to mount an intervention in Ukraine, if it so desires. I am agnostic on what Russia’s ultimate decision on that question will be. But the situation in Kazakhstan doesn’t make a RU operation less likely.

To the contrary, because the Kazakhstan crisis has further strained relations between Russia and the West, it will make it more difficult to achieve a peaceful resolution to the standoff over Ukraine.

One thought on “The Hunter Connection? Kazakh Security Chief Arrested For Treason Was “Close Friends” With Bidens”