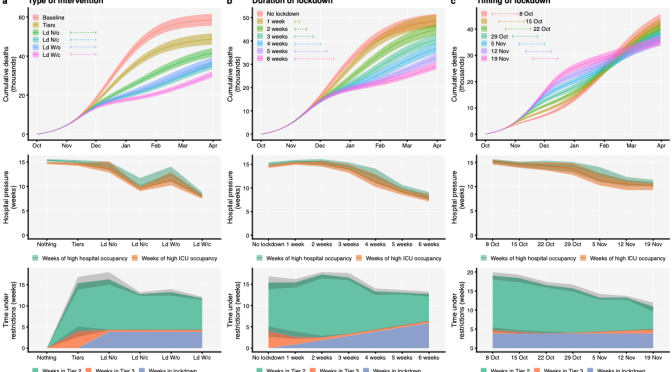 Authored by Fraser Nelson via The Spectator,
December 20th, 2021

The latest Sage papers have been published, envisaging anything from 200 to 6,000 deaths a day from Omicron depending on how many more restrictions we’ll get — up to and very much including another lockdown. Earlier today I had an unexpected chance to ask questions of Graham Medley, the chair of the Sage modeling committee.

He’s a professor at the London School of Hygiene & Tropical Medicine (LSHTM) which last weekend published a study on Omicron with very gloomy scenarios and made the case for more restrictions. But JP Morgan had a close look at this study and spotted something big: all the way through, LSHTM assumes that the Omicron variant is just as deadly as Delta. ‘But evidence from South Africa suggests that Omicron infections are milder,’ JP Morgan pointed out in a note to clients. Adjust for this, it found, and the picture changes dramatically:

“Bed occupancy by Covid-19 patients at the end of January would be 33% of the peak seen in January 2021. This would be manageable without further restrictions.

So JP Morgan had shown that, if you tweak one assumption (on severity) then — suddenly — no need for lockdown.

Why was this scenario left out? Why would this fairly important and fairly-basic fact on Omicron modeling not presented by Sage modelers like Professor Medley to ministers — and to the general public? I was thrilled for the chance to speak to him on Twitter. It was kind of him to make the time (he’s still going, as far as I can make out). The Spectator data hub has a page devoted to past Sage modeling vs actual, and I wanted to make sure I was not being unfair to Sage in my selection or presentation of those charts.

The latest Sage paper-drop — the 6,000-deaths-a-day one — refers to ‘scenarios,’ not predictions. Professor Medley emphasizes the distinction: saying something could happen is not saying that there’s a realistic chance of it happening. But then why do Sage modelers publish some scenarios and not others?

Apologies for the language at the end, but it was the last tweet that he replied to on this thread.

Revealingly, he seemed to think my question odd: if it’s quite plausible that Omicron is mild and doesn’t threaten the NHS, what would be the point of including that as a ‘scenario’? He seemed to suggest that he has been given a very limited brief and asked to churn out worse-case scenarios without being asked to comment on how plausible they are.

“We generally model what we are asked to model. There is a dialogue in which policy teams discuss with the modellers what they need to inform their policy.

Might this remit mean leaving out just-as-plausible, quite-important scenarios that would not require lockdown?

“Decision-makers are generally on only interested in situations where decisions have to be made.

Note how careful he is to stay vague on whether any of the various scenarios in the Sage document are likely or even plausible. What happened to the original system of presenting a ‘reasonable worst-case scenario’ together with a central scenario? And what’s the point of modeling if it doesn’t say how likely any of these scenarios are?

From what Professor Medley says, it’s unclear that the most-likely scenario is even being presented to ministers this time around. So how are they supposed to make good decisions? I highly doubt that Sajid Javid is only asking to churn out models that make the case for lockdown. That instruction, if it is being issued, will have come from somewhere else.

Professor Robert Dingwall, until recently a JCVI expert, has said that Medley’s candor reveals ‘a fundamental problem of scientific ethics in Sage’ — ie, a hardwired negativity bias.  ‘The unquestioning response to the brief is very like that of SPI-B’s behavioral scientists,’ he says and suggests that the Covid inquiry looks into all this.

At a time when we have just been given a new set of ‘scenarios’ for a new year lockdown, it might be good if someone — if not Professor Medley — would clear up what assumptions lie behind the new 6,000-a-day-dead scenario, and if emerging information from South Africa about Omicron and its virulence has been taken into account. And how probable it is that a double-jabbed and increasingly boosted nation (with 95 percent antibody coverage) could see this worst-case scenario come to pass.

In my view, this raises serious questions not just about Sage but about the quality of the advice used to make UK lockdown decisions. And the lack of transparency and scrutiny of that advice. The lives of millions of people rest on the quality of decisions, so the caliber of information supplied matters rather a lot — to all of us.

I’ve asked Professor Medley to come on Spectator TV, to have a longer conversation outside Twitter. He has written for us before so I hope he accepts. For now, although I often curse the platform, I should thank Twitter for giving me the chance to ask some questions of someone so well-placed in such an important issue.