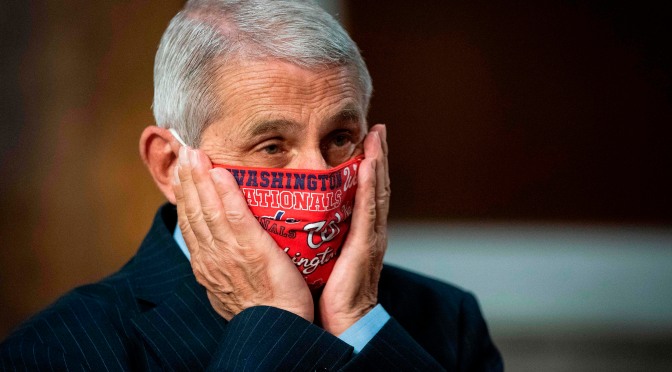 Judicial Watch has done it again by procuring another fresh trove of evidence implicating fake government “doctor” Tony Fauci for using American taxpayer dollars to fund the tweaking of bat coronaviruses and other pathogens.

This latest batch of records completely validates the claims of Sen. Rand Paul (R-Ky.), who was mocked by Democrats and “journalists” after he chastised Fauci during a series of Senate hearings.

An NIH spokesperson falsely claimed that Fauci was “entirely truthful” during his exchanges with Paul, even though we now know that Fauci funneled cash to Wuhan and who even knows where else in order to create deadly bioweapons, including the “vaccines” and “boosters” currently being pushed by the government.

It turns out that Fauci had direct access to data from the infamous EcoHealth Alliance, a partner of the WIV, a full 15 months prior to when he was confronted by Paul on national television.

“Judicial Watch announced today that it received 221 pages of records from the Department of Health and Human Services (HHS) which include a grant application for research involving the coronavirus that was submitted in 2018,” Judicial Watch reported.

Other documents obtained by Judicial Watch include various records of communications, contracts and agreements with the WIV that expose Fauci and EcoHealth for conspiring over many years to tamper with coronaviruses. Peter Daszak of EcoHealth was of course involved, as was Ralph Baric, Ian Lipkin and various others, we now know.

“NIAID has been funding Peter’s group for coronavirus work in China for the past 5 years through [grant] R011R01A|110964: ‘Understanding the Risk of Bat Coronavirus Emergence,’” Judicial Watch further reported.

“That’s now been renewed, with a specific focus to identify cohorts of people highly exposed to bats in China, and work out if they’re getting sick from CoVs … Collaborators include Wuhan Institute of Virology (currently working on the nCoV) and Ralph Baric.”

One Fauci project involved the discovery that SARS-related CoVs can, in fact, bind to human cells when manipulated in a lab. These manipulated pathogens can then cause SARS-like disease in humanized mouse models.

A disease they are calling Swine Acute Diarrheal Syndrome Virus, or SADS-CoV, was also used in the killing of more than 25,000 pigs in China’s Guangdong Province.

Daszak’s allies also worked on a program involving viral discovery in bats. This is where SARS-CoV is said to have originally been identified. These and other projects were discussed in emails sent back and forth between Fauci, Daszak and other allied parties.

A “Notice of Award” dated July 13, 2020, also increased the amount of NIH money going to Daszak’s firm by a whopping $369,819, all of which was siphoned from American taxpayers.

The project period for this award began on June 1, 2014, and is scheduled to run through June 30, 2021. The name of it is “Understanding the Risk of Bat Coronavirus Emergence.”

It was further revealed that large chunks of change were directed towards the University of North Carolina – Chapel Hill (UNC), which conducted research in conjunction with East China Normal University in China and Duke–NUS Medical School in Singapore.

The specialists overseeing the award that went to UNC and its partners specified that it “may include collaborations with and / or between foreign organizations.” It also highlighted “Highly Pathogenic Agents” that may require the use of a biocontainment safety facility of BSL3 or higher.

The research “aims” listed in the EcoHealth grant application include “sequence receptor binding domains (spike proteins) to identify viruses with the highest potential for spillover which we will include in our experimental investigations.”

“We will use S protein sequence data, infectious clone technology, in vitro and in vivo infection experiments and analysis of receptor binding to test the hypothesis that % divergence thresholds in S protein sequences predict spillover potential,” the application further reads.

All throughout the application and other documents are admissions of allyship among Daszak, Baric and various Chinese and other foreign partners. This was a large-scale international affair, in other words.

In response to these and other bombshells, the NIH published an open letter and accompanying analysis that it claimed would “set the record straight.” In a nutshell, the NIH insists that its bat coronavirus research was not the catalyst for the plandemic because the viruses it was working on and the alleged viruses currently in circulation have “sizable genetic differences.”

“Researchers like Fauci can circle the wagons all they want, but that doesn’t mean the rising tide of questions will magically disappear,” noted American Liberty.

“How much evidence is needed before Fauci is fired, NIAID and NIH disbanded, and China held accountable for the bio-warfare it has started?” asked one of the news outlet’s commenters.

More related news about Fauci, the Wuhan Institute of Virology, bat coronaviruses and deep state bioweapons operations can be found at Pandemic.news.