It is now Day 7 in the Trial of Ghislaine Maxwell. We left off yesterday with FBI analyst Kimberly Meder testifying about an image found on a CD acquired during the FBI’s raid on his Upper East Side townhouse. Meder returned to the stand this morning.

The first accuser “Jane”, who testified last week, apparently referred to Maxwell’s defense attorney as “a c-nt” when speaking to another witness. This issue was raised this morning by defense attorney Laura Menninger before the jury was brought into the courtroom.

Jurors were shown a number of photos of Ghislaine Maxwell and Jeffery Epstein together – including two shots of Maxwell “spiling out of a skimpy top” while rubbing Epstein’s feet aboard an airplane.

The photos were identified by FBI analyst Kimberly Meder, who said that she’d reviewed them after the CDs were brought in after the 2019 raid. Other photos shown included one of Epstein holding Maxwell from behind while speaking on a phone in a grassy field.

A document found on the hard drive recovered from the New York mansion raid describes a rosy relationship between Epstein and Maxwell, the document was created by a user named “Gmax”.

“Jeffrey and Ghislaine have been together as a couple for the last 11 years. They are, contrary to what many people think, rarely apart. I almost always see them together,” the document, which was created on Oct. 14, 2002, began.

It was not clear why the document was created or what purpose it served.

The next alleged victim, Carolyn, takes the stand

A woman going by her first name, Carolyn, for privacy reasons, is testifying about some of the “over 100” sexualized massages she gave Jeffrey Epstein between the ages of 14 and 18.

“Something sexual happened every single time,” said Carolyn, one of the victims in the indictment against Maxwell.

Wearing a magenta and white striped blouse, her straight brown hair parted in the middle, the alleged victim choked up several times as she described the abuse.

“A lot of them run together,” she said of the encounters.

The court broke for lunch around 1:30.

A photo of Jeffrey Epstein kissing his alleged madam Ghislaine Maxwell was displayed prominently in his Florida mansion, according to a new trove of evidence that also provides an inside look at his creepy Manhattan townhouse.

Pictures from the 2019 raid on Epstein’s New York Mansion

Special Agent Kelly Maguire testified Monday that her team “forced entry” into 9 E. 71st St. on July 6, 2019, after no one answered the door, and then swept through all 40 rooms — where creepy taxidermy animals and a bizarre painting of Bill Clinton in a blue dress were on display

In an office near the front of the 19,000-square-foot home, authorities uncovered several plastic bins that contained hard drives — already covered in evidence tape, Maguire told the court.

“As you sit here today, do you have personal knowledge of why there was evidence tape on these boxes?” Assistant US Attorney Alison Moe asked.

On the third floor, inside what looked like a dressing room, the agents found a safe stashed inside a closet — which they opened using a saw, Maguire told the jury.

There were also binders filled with CDs, but authorities had to get another warrant in order to seize them. When they returned the next day, however, all the items inside the safe had disappeared.

Maguire said she called Richard Kahn, now the co-executor of Epstein’s estate, and one of the sex offender’s attorneys, Andrew Tomback, and told them she had a warrant for the items. Roughly 30 minutes later, Kahn brought them all back in two suitcases, the agent testified.

Also on the third floor, agents came across a massage room with heavy pink curtains and a massage table covered in a blanket and a white sheet.

More CDs were found inside a room on the fifth floor, in the bottom of a drawer of a dresser. In the same room, agents discovered a cache of labeled black binders, filled with pages of thumbnail photographs that corresponded to CDs. 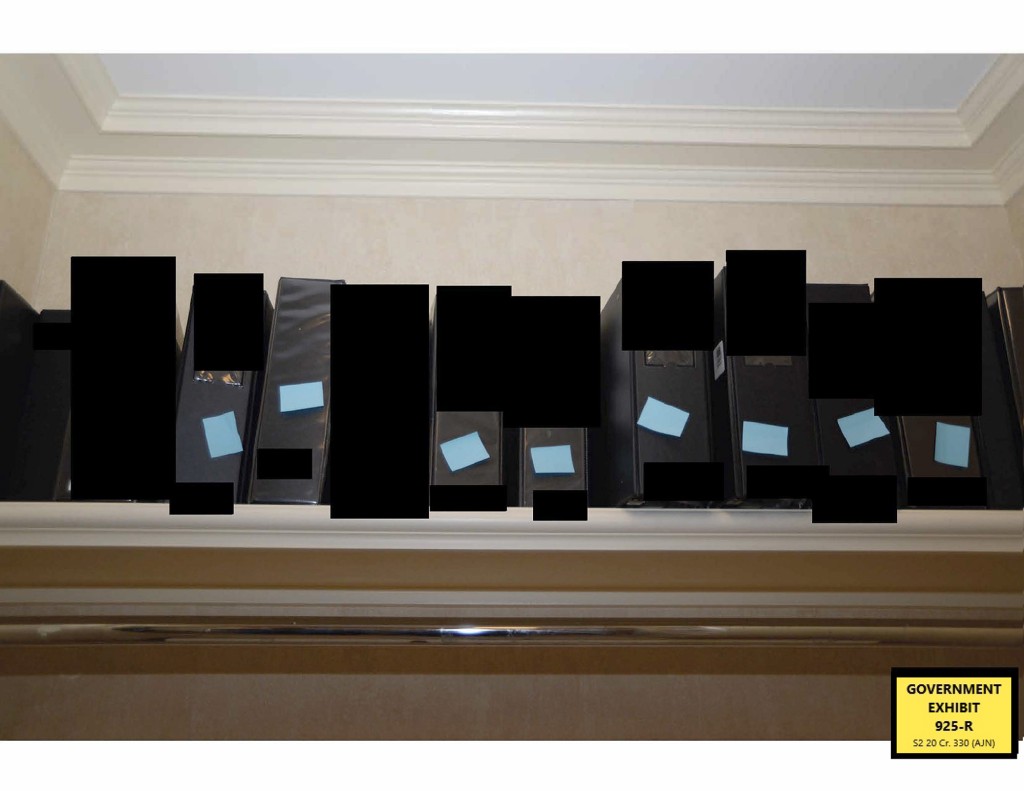 The black binders containing part of the extensive CD collection. 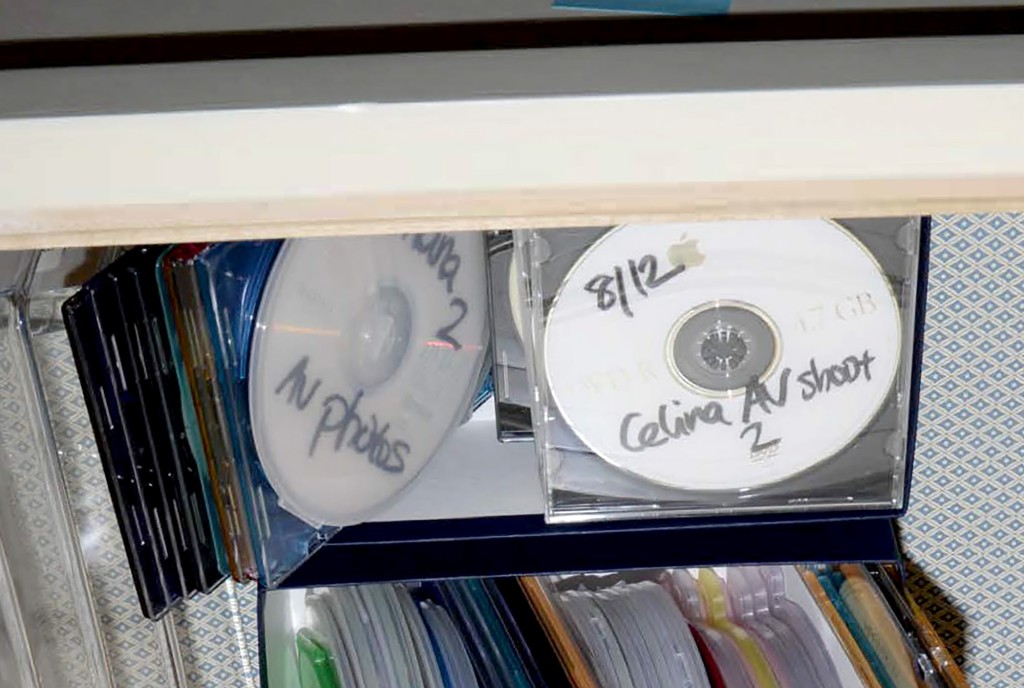 An up-close shot of the CD collection.

FBI analyst Kimberly Meder, who went through all the photos, testified Tuesday that some of the photos were of Epstein and Maxwell together, including one of her in a skimpy top, rubbing his feet aboard a plane.

One framed photo of the twosome smooching was found by Palm Beach police inside Epstein’s sprawling home there during a 2005 raid, according to photos of the operation submitted as evidence. 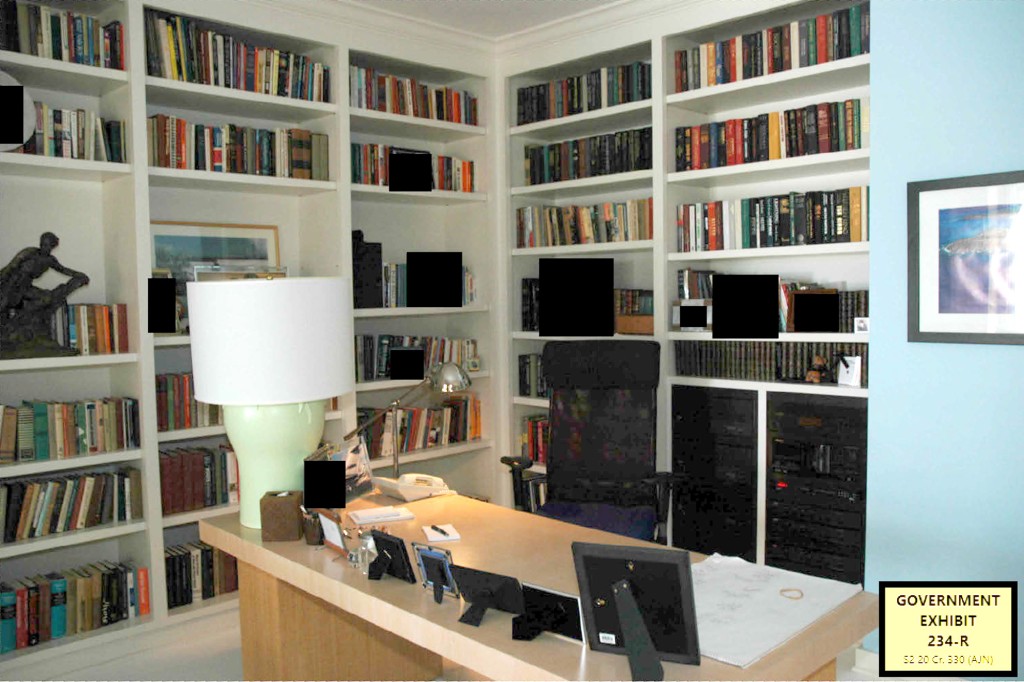 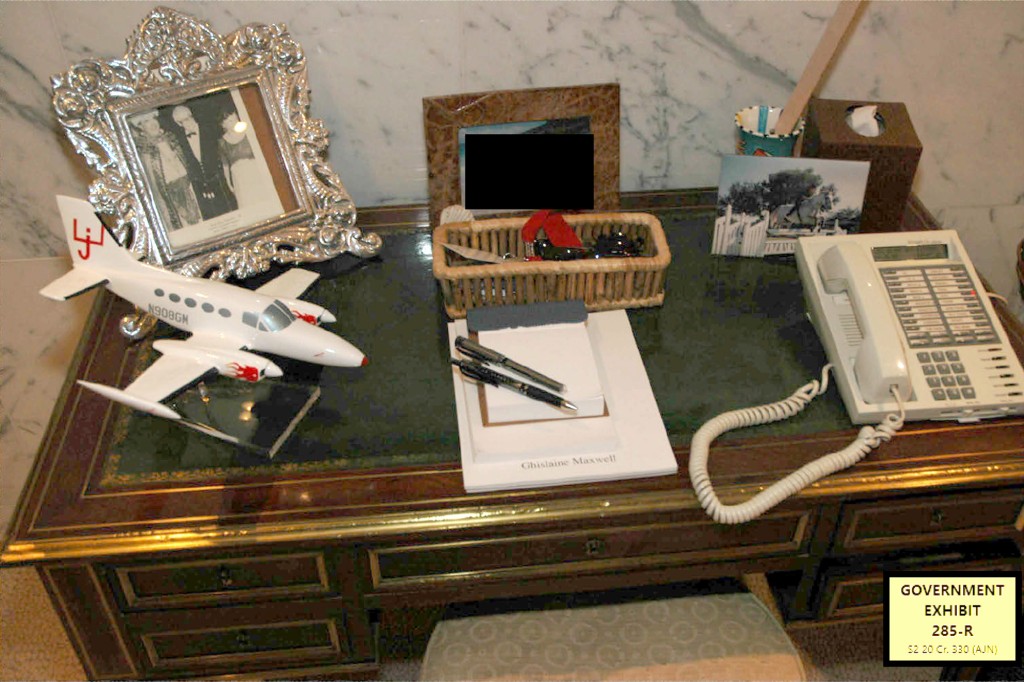 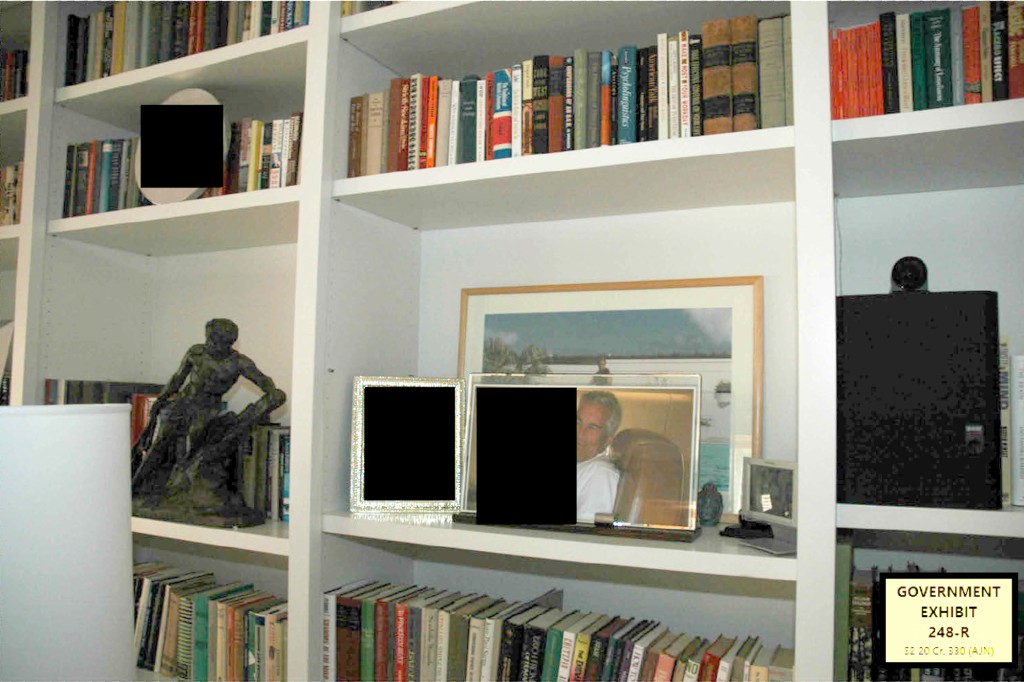 A bookshelf in the beachfront office with multiple photos of Epstein.

The beachfront lair also included an odd statue on a bookshelf of someone resembling Epstein giving another person a massage.

Several women have alleged that Epstein, and at times Maxwell, would sexually abuse them during so-called massage sessions at the horror house. 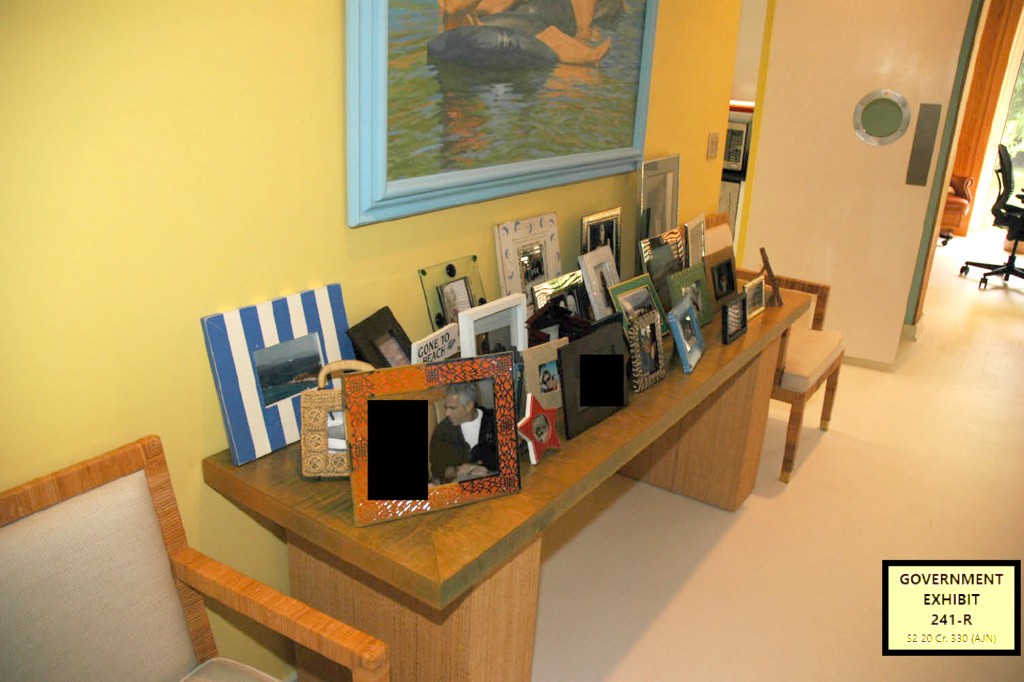 A table of photos at Epstein’s Palm Beach manse.

The neoclassical townhouse in Manhattan sold for $51 million to former Goldman Sachs executive Michael D. Daffey, who has said he is undertaking a physical and spiritual rehabilitation of the mansion.

Updates will be provided as more information comes out.