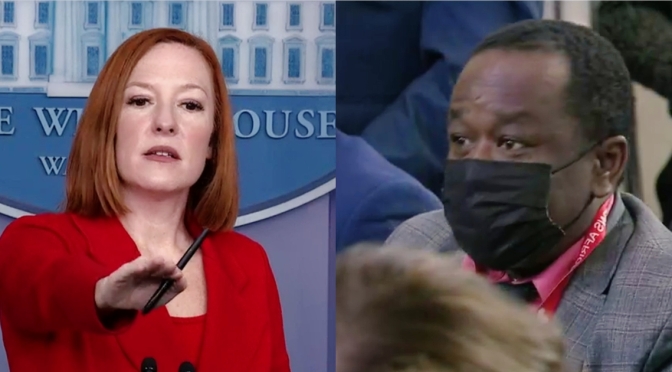 White House Press Secretary is used to Fox News correspondent Peter Doocy criticizing the president and hitting her with tough questions daily, but now the criticism is coming from others.

On Thursday, Simon Ateba, a reporter for Today News Africa, got into a heated exchange with Psaki, who refused to call on him, after she spoke about African travel restrictions.

Earlier in the briefing, a reporter questioned Psaki about the travel restrictions, saying, “just because the Omicron variant is in several states — I’m just wondering if you could talk a little bit about why the travel ban still makes sense.  And I know that you talked about the timeline still being iffy, but could you just maybe explain a little bit more why those travel bans make sense right now?”

Psaki responded by saying, “Well, again, this is all based on — it’s not a decision made out of the White House.  It — ultimately, it’s based on the recommendation — always — of our public health and medical experts.

“They have advised — several days ago — the President to put in place restrictions on a set of countries where we are seeing the variant, specifically in South Africa, spread to hundreds if not thousands of cases and neighboring countries because of the concern about spread,” the press secretary said.

“We will evaluate every day if those restrictions — any of these restrictions should be expanded upon.  But, again, there’s more at this point we’re still learning about the variant that our team is working 24/7 to assess, and I don’t have any prediction of an end to any restrictions or additional ones at this point in time,” she said, The New York Post reported.

Ateba waited to be called on so he could ask her about the restrictions but Psaki never did call, causing the reporter to become frustrated and accuse her of lying.

“I just answered — Simon, I answered a question on this,” she said as the reporter continued to attempt to ask his question. “Let’s let Patsy ask a question.”

As he continued to shout she said, “Simon, I answered a question on this.  Let Patsy…”

The exchange came a day after the same reporter hammered Dr. Anthony Fauci with questions on the restrictions.

“There are zero cases of COVID — of Omicron in Zimbabwe, in Namibia, in Lesotho, in Mozambique,” he said. “What justifies imposing a travel ban on countries that have zero cases of the Omicron variant?”

“But we wanted to see if we could buy time temporarily, so I do hope that this gets sorted out and lifted before it has any significant impact on your country,” the doctor said.

Psaki has defended the travel restrictions even as there are none for Europe, a continent with many cases of Omicron and where the variant may have originated before being found in South Africa.

“I guess I’m just trying to understand why if one person, let’s say in Germany or somewhere else, gets on a plane and comes to the United States, isn’t that person — just as likely to have the variant end up in the United States? Could you just talk a little bit more about the science behind the reasoning there?” PBS reporter Yamiche Alcindor said on Monday.

“Well, I think the larger point, Yamiche, is that it is a much larger spread in South Africa than it is at this point in Europe and other countries,” the press secretary said. “We will continue to assess if there are additional restrictions that need to be put in place.”

One thought on “‘You Are Saying Something That Is False,’ Sparks Fly Between Psaki And African Reporter”