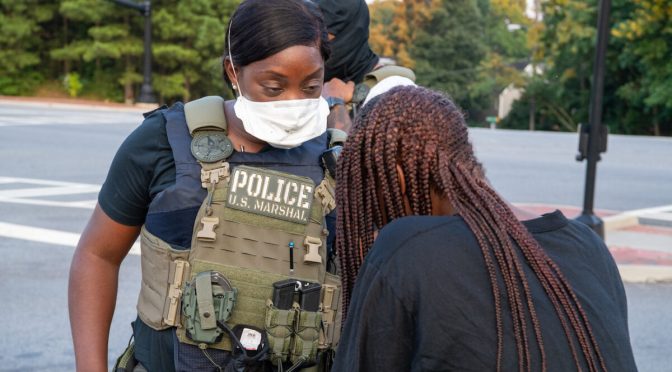 The U.S. Marshals Service on Thursday announced they have found 39 missing children in Georgia and dealt sex trafficking charges and more for the arrested individuals as part of an endangered missing children mission called “Operation Not Forgotten.”

Law enforcement officials rescued 26 children, safely located 13 other missing children in person, and arrested nine people as part of a two-week operation in August in the cities of Atlanta and Macon in Georgia.

“The 26 warrants cleared included 19 arrest warrants for a total of nine individuals arrested, some of whom had multiple warrants.”

Director of the U.S. Marshals Donald Washington said in a statement: “The message to missing children and their families is that we will never stop looking for you.”

The 39 children who were missing were considered to be “some of the most at-risk and challenging recovery cases in the area, based on indications of high-risk factors such as victimization of child sex trafficking, child exploitation, sexual abuse, physical abuse, and medical or mental health conditions,” the U.S. Marshals stated.

In a press conference announcing the news, Washington told reporters that the operation is among the missions that the Marshals are “very proud of” but “that we wish we didn’t have.”

“As successful as this operation was there is a harsh reality here—the harsh reality is, ‘gee, why are we doing this in the first place? Why do we have missing, endangered children?’” he said. “The stats are that in every 40 seconds, there is a child abducted in the United States.”

“39 – That’s how many young lives are getting a new start, and that’s how we measure success,” Carr said.

The operation, a culmination of several months of planning, was carried out by the U.S. Marshals’ Service Missing Child Unit and its Southeast Regional Fugitive Task Force, as well as a number of Georgia state and local agencies, including the Georgia Bureau of Investigation, and the National Center for Missing and Exploited Children.

“It’s hard to put into words what we feel when we rescue a missing child, but I can tell you that this operation has impacted every single one of us out here,” Chief of the Missing Child Unit Darby Kirby, said in a statement. “We are working to protect them and get them the help they need.”

“Operation Not Forgotten” is described as a “relatively new mission for the U.S. Marshals” which has conducted two recent large scale operations and several smaller ones around the United States.

“The future should see many similar operations throughout the United States as the Missing Child Unit ramps up operations using the man hunting skills, in which the Marshals specialize, to locate and rescue missing minors,” the U.S. Marshals announced.

The U.S. Marshals had established a Missing Child Unit under the Justice for Victims of Trafficking Act of 2015, which enhanced the agency’s authority to help law enforcement recover missing, endangered or abducted children—regardless of whether a fugitive or sex offender was involved. The agency helped recover 295 missing children in 2019.