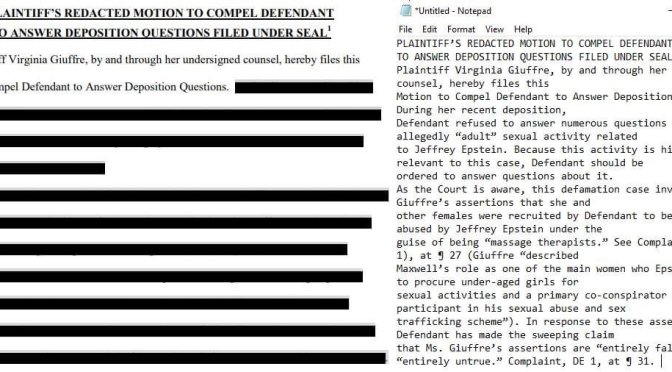 (Stillness in the Storm Editor) One question: was this on purpose?

Given the unquestionably important nature of the Ghislaine Maxwell case, a woman who might have the evidence to expose the pedo-deep state; and finally make it clear to the people, once and for all, that there is a criminal syndicate that has infested every walk of life, you would think the powers that be would be very careful.

Unless someone wanted this to happen. Unless this someone was part of an alliance of whitehats that wanted this information to get “leaked” so more of the truth could be exposed faster.

Keep your eye on this story, as I think it will become a major aspect of the ongoing deep state takedown operation.

OMG!  The documents released last night by the DOJ were presented in a format that can be unredacted by copying to Notes.

It’s being reported that you can uncover the content behind the redactions, in at least one file released yesterday, related to the Epstein case:

This appears to be the case as of last night – however, due to incredibly high demand, trying to access the file can time you out:

Please let us know if you have a chance to do this and feel free to share any shocking unraveled redactions.  We know the FBI in the past was redacting items, to protect the FBI, and we assume this is still the case.