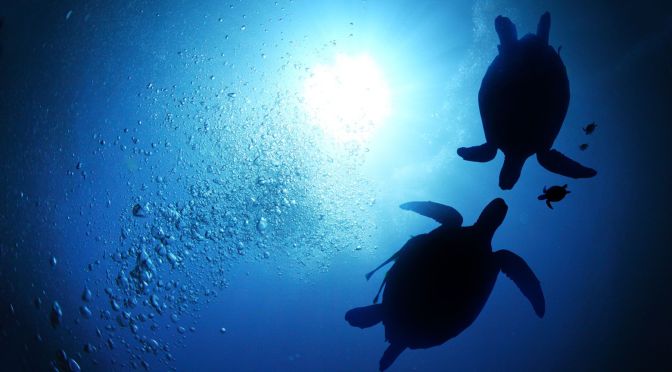 Sea turtles, whales, and dolphins may soon be free of the deadly possibility that they will get entangled in the huge driftnets floating off the coast of California.

The U.S. Senate on Wednesday unanimously passed a bipartisan bill to phase out the use of the harmful mesh gillnets in federal waters there—the only place the nets are still used in the United States.

The mesh driftnets, which are more than a mile long, are left in the ocean overnight to catch swordfish and thresher sharks. Other marine species including whales, dolphins, sea lions, sea turtles, fish, and sharks can also become entangled in the large mesh nets, injuring or killing them.

Turtle Island Restoration Network has led a coalition of concerned citizens and partner organizations for nearly 20 years, working to stop the devastating impact of this driftnet fishery on sea turtles and other ocean animals—with much success.

In 2018, California passed a four-year phase out of large mesh drift gillnets in state waters, but the new law, The Driftnet Modernization and Bycatch Reduction Act, would extend similar protections to federal waters within five years and authorize the National Oceanic and Atmospheric Administration to help the commercial fishing industry transition to more sustainable gear types.

“This legislation will ensure no more whales or dolphins fall victim,” said Annalisa Batanides Tuel, policy and advocacy manager for Turtle Island Restoration Network. “We are encouraged that the United States is taking steps to address harmful fishing methods in the ocean and off our coasts.”

The use of large mesh driftnets by a single fishery in California is responsible for 90 percent of the dolphins and porpoises killed along the West Coast and Alaska. At least six endangered, threatened, or protected species are harmed by driftnets off the California coast.

“We are now one step closer to removing these nets from our waters,” Senator Feinstein said. “There is no reason to allow the carnage of large mesh drift gillnets when there are better, more sustainable methods to catch swordfish. We can preserve the economically important swordfishing industry while protecting the ocean and its wildlife.”

POPULAR: Scientists Find Half the World’s Fish Stocks Are Recovered—or Increasing—in Oceans That Used to Be Overfished

Large mesh drift gillnets are already banned in the U.S. territorial waters of the Atlantic Ocean and the Gulf of Mexico, as well as off the coasts of Washington, Oregon, Alaska and Hawaii. However, they remain legal in federal waters off the coast of California. The United States is also a member of international agreements that ban large-scale driftnets in international waters.

The bill would phase out the use of the nets and help the industry transition to more sustainable methods like deep-set buoy gear that uses a hook-and-buoy system. Deep-set buoy gear attracts swordfish with bait and alerts fishermen immediately when a bite is detected. Testing has shown that 94 percent of animals caught with deep-set buoys are swordfish, resulting in a vastly smaller incidental catch than drift gillnets.

To become law, the bill must pass also the House of Representatives. In May, 2019, the House Natural Resources Subcommittee on Water, Oceans, and Wildlife held hearings on the bill.

MORE: 15 Giant Tortoises Finally Returned to Their Galapagos Island Home After Saving Their Species With 1,900 Babies