By ANDREW SNELL and JAMES GORDON
20th of July 2020

The son of a federal judge has been shot dead and her husband critically wounded after they were attacked at their home by a gunman dressed as a FedEx driver.

The attack happened at the home of Esther Salas, 51, an Obama-appointed District Court judge, in North Brunswick, New Jersey, on Sunday evening.

Daniel, who was the couple’s only child, is believed to have opened the door to the gunman at around 5pm. He was shot ‘in the heart’ immediately, according to friends of the family.

His father Mark was then shot several times when he went to the front door to see what had happened. The gunman fled. 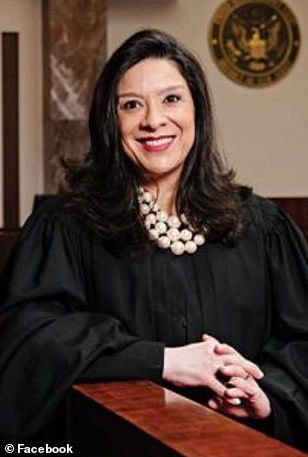 Judge Esther Salas was in the basement of her home when the gunman arrived. Her 20-year-old son Daniel (far right) answered the door to the assailant, who was dressed as a FedEx driver, and was shot in the heart. His father Mark (center) went to the door to see what had happened and was shot multiple times. Mark is in the hospital in critical condition. 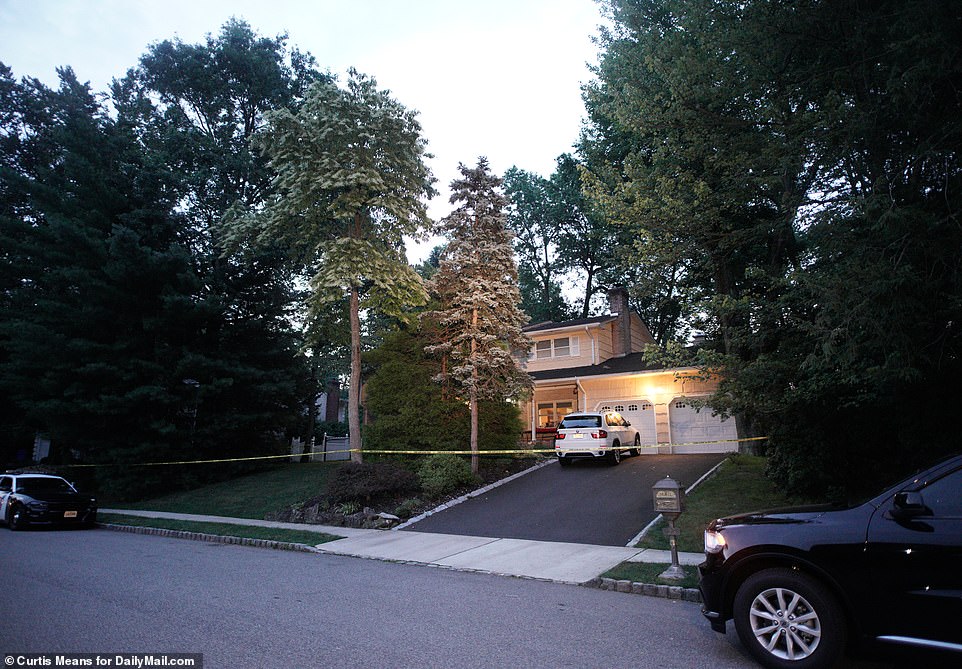 The judge and her family were the targets of an assassination attempt on Sunday evening at their home in North Brunswick Township, New Jersey. The house is pictured on Monday morning.

Judge Salas had recently been assigned to a civil financial fraud case tied to Jeffrey Epstein.

It was brought by Deutsche Bank investors who claim the bank made false and misleading statements about its anti-money laundering policies and failed to monitor ‘high-risk’ customers including convicted sex offender billionaire Jeffrey Epstein. 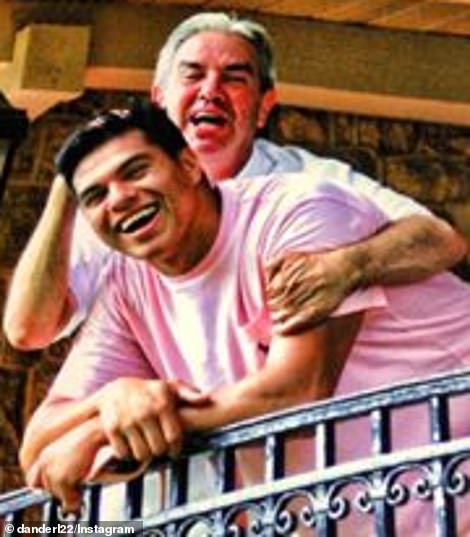 It remains unclear who the gunman was targeting. Daniel was the couple’s only child

Earlier this month the bank agreed to pay a $150million fine for continuing to work with Epstein after he was convicted of soliciting underage prostitutes in 2008.

It’s unclear whether her husband is actively involved in any cases.

Friends say she often made remarks about her job making her a target for attacks but that recently, she was not concerned.

‘As a judge, she had threats from time to time, but everyone is saying that recently there had not been any,’ Francis ‘Mac’ Womack, the mayor of North Brunswick, New Jersey, told The Washington Post.

‘She had some high-profile cases, and she was always a little concerned,’ Marion Costanza, who lives three doors down from the family, said.

Anderl was a prosecutor for 10 years before switching to private practice.

During his time in the prosecutor’s office, he tried more than 100 cases including 33 murder trials.  , said that Daniel was ‘shot through the heart’.Mark is reportedly in critical but stable condition at Robert Wood Johnson Hospital in New Brunswick.

Judge Salas is believed to have been in the basement of the home during the shooting and was unharmed in the attack.

She and Daniel were close, neighbors said, and she was devastated when he moved away from home to go to college.

‘I think she cried for a week and that’s just in D.C. He was her only child,’ Costanza added.

She said Daniel was a good-natured boy who once brought her supplies during a snow storm.

‘There’s no one like them. They’re extremely good-natured. They would do anything for anyone,’ she said. 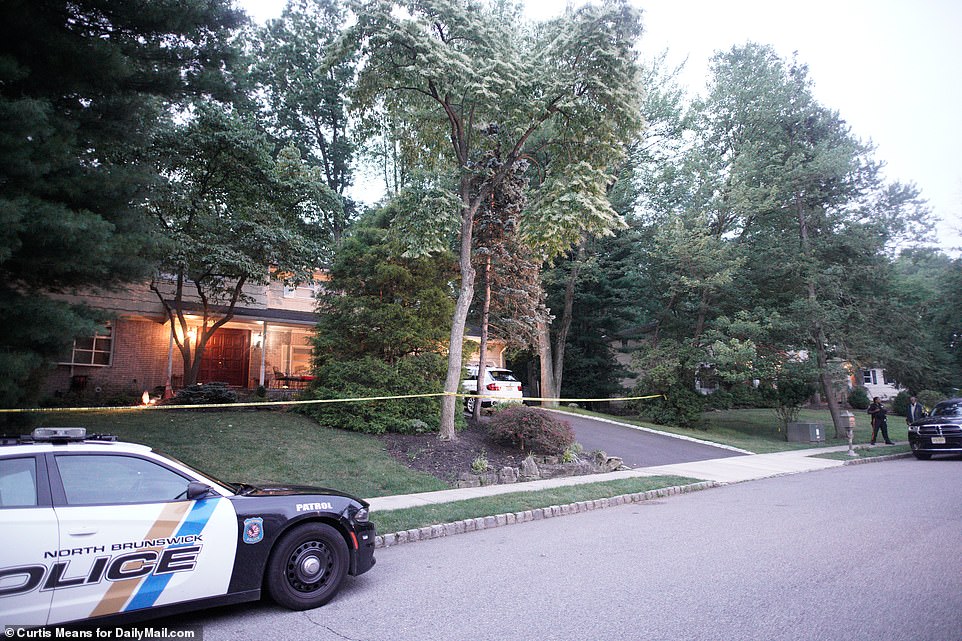 Police outside the family’s home in New Jersey on Monday morning. No one has been arrested. Judge Salas is being guarded by the authorities 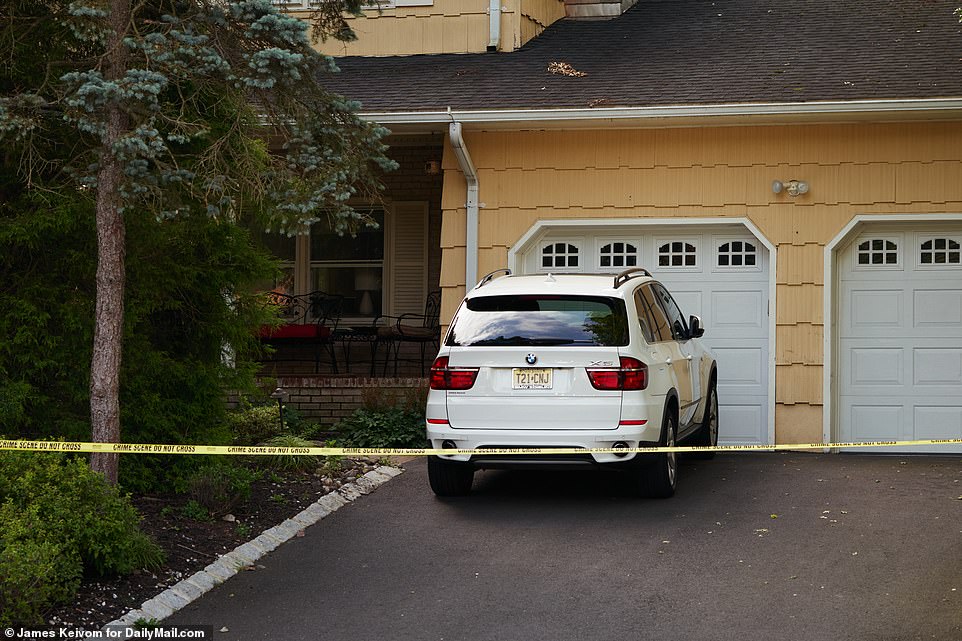 The family home remained taped off on Monday morning. Neighbors were shocked and saddened by the attack 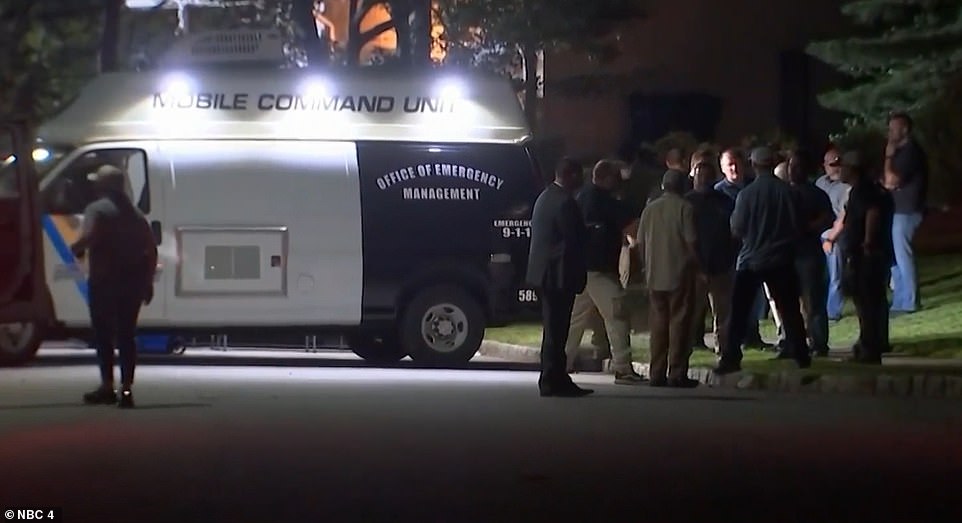 The FBI, U.S. Marshals, New Jersey State Police along with the New Jersey Office of the Attorney General have all been on the scene of the shooting throughout Sunday evening 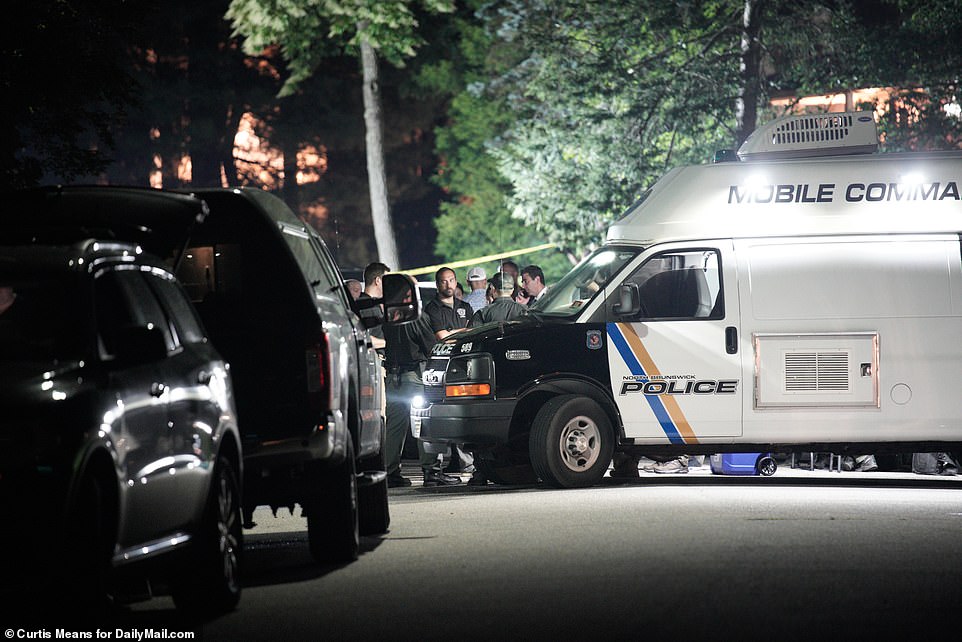 FBI agents at the home of Esther Salas, 51, an Obama-appointed District Court judge, in North Brunswick, New Jersey, whose son was killed and husband was shot by an unknown shooter. 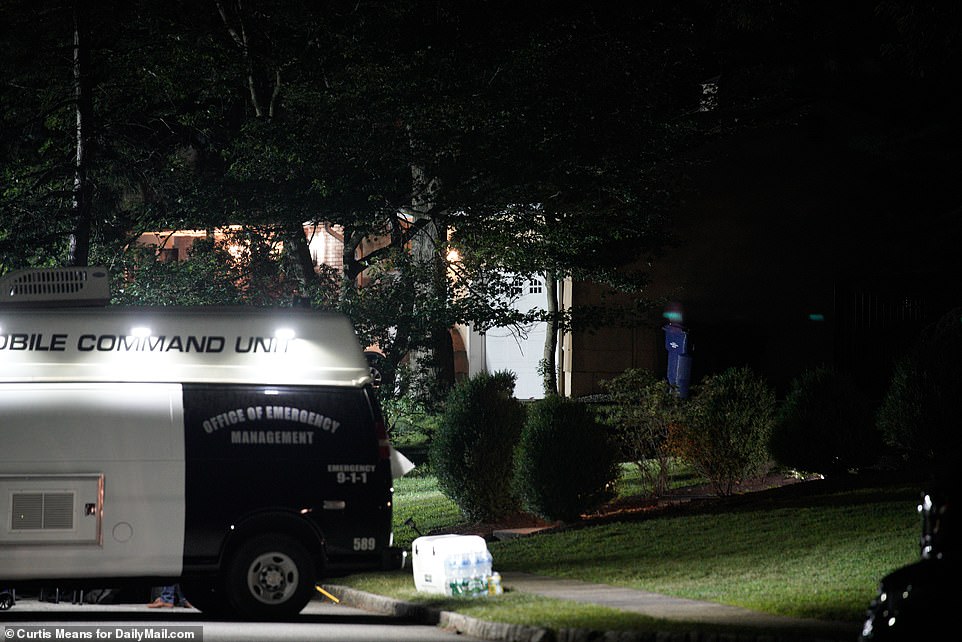 The U.S. Marshals have also been called to provide the judge with a security detail, according to a law enforcement official.

Another said: You don’t expect anything like this around here. We all know our neighbors, we all greet each other and it’s a quiet area.’

Crime scene tape could be seen stretching around the perimeter of the family home located in the Hiddlen Lake section of North Brunswick. The street had been closed off to traffic.

Salas staggered their sentences so that one of them could be available to take care of their four children.

In 2017, she barred federal prosecutors from seeking the death penalty against an alleged gang leader charged in several Newark slayings, ruling the man’s intellectual disability made him ineligible for capital punishment.

Salas later sentenced the man, the leader of the Newark Bloods street gang to 45 years in prison.

She has also dealt with cases involving members of the Grape Street Crips according to NJ.com. The case was connection with a long-running drug-trafficking network that was taken down by the FBI in 2015.

Judge Salas had received death threats in the past but as of Sunday night, authorities have not suggested the shootings are linked to any of her previous cases.

‘As a judge, she had threats from time to time, but everyone is saying that recently there had not been any,’ said Mayor Womack to ABC News, who is friends with the judge and her husband.

‘No words can express the sadness and loss we share tonight as a community after senseless shootings of the husband and son of USDC Judge Esther Salas,’ she said.

The mayor said investigators are now ‘trying to get a hard make on the vehicle’ to try and track the suspect.

‘We commit to do all we can to support the family in this time, as well as all law enforcement agencies involved,’ Womack said.

The mayor noted how close the family appeared to be

‘He’s a very very exuberant, vibrant, one hundred percent pleasant person,’ Womack said to CNN. ‘He loves to talk about his wife, and he loves to brag about his son, and how his son would excel in baseball, and how he was doing down in college in Washington … I’m just very sorry to see him going through this.’

The U.S. Marshals have also been called to provide the judge with a security detail, according to a law enforcement official.

Salas had sat a judge on the U.S. District Court for New Jersey in Newark, for nine years and was the first Hispanic woman to serve on the federal bench in the state.

Before that she spent five years as a magistrate judge, and nine years prior to that as a federal public defender before President Barack Obama nominated her to serve as a District Court Judge in 2010.

The daughter of a Cuban mother and a Mexican father, Salas spent part of her childhood on welfare after a fire destroyed her Union City apartment, according to The Globe.

Her husband, Mark Anderl also works in legal circles and served as an assistant prosecutor in Essex County, New Jersey for ten years before becoming a criminal defense attorney.

Salas met her husband when he was working as a prosecutor and she was working as a law school intern. He spotted her ‘getting fingerprinted’ and came over to talk to her, she told New Jersey Monthly in February 2018. ‘We’ve been inseparable since 1992,’ she said. 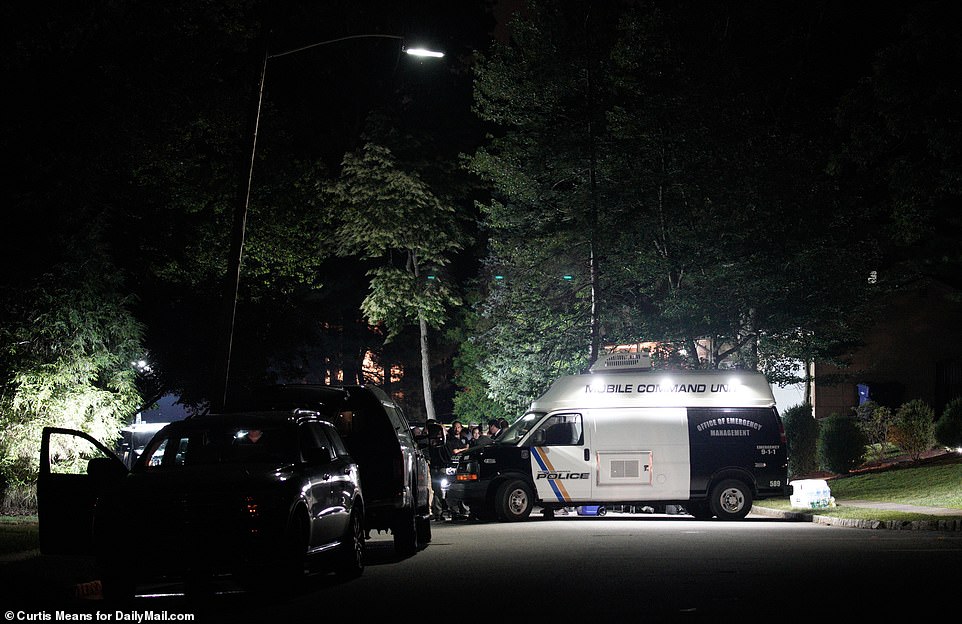 All manner of state and local law enforcement agencies were gathered outside the home on Sunday night. 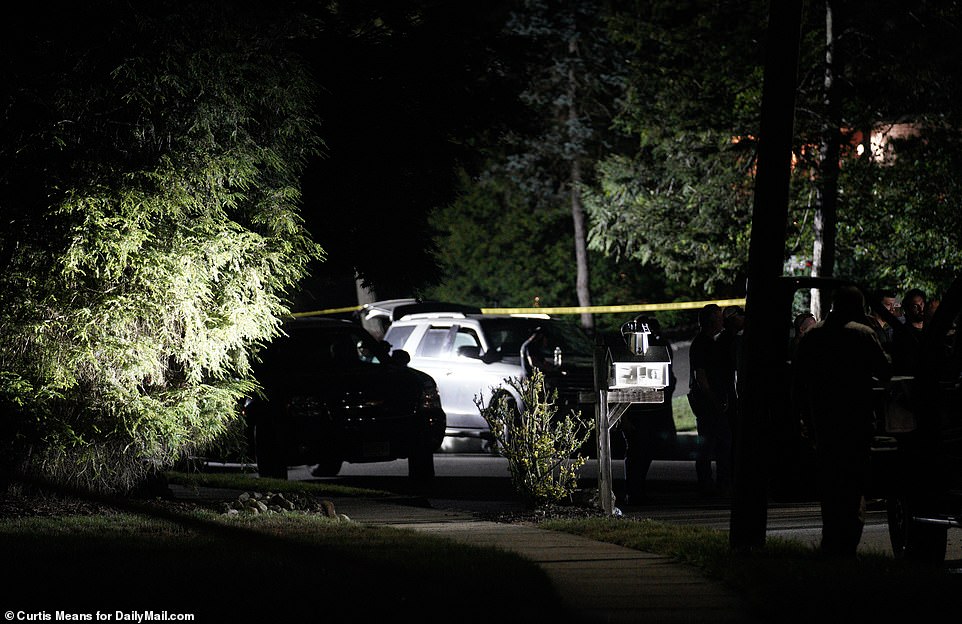 Crime scene tape could be seen stretching around the perimeter of the family home located in the Hiddlen Lake section of North Brunswick. The street has been closed off to traffic. 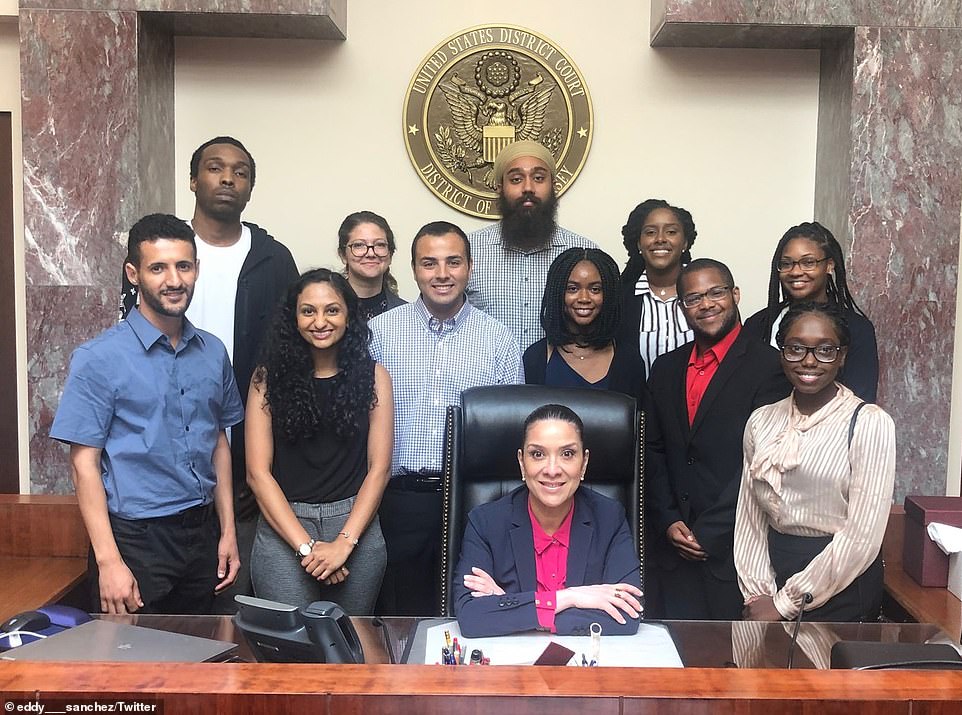 Judge Esther Salas is pictured with students in an August 2019 photo posted to Twitter.

New Jersey Governor Phil Murphy said in a statement: ‘Judge Salas and her family are in our thoughts at this time as they cope with this senseless act. This tragedy is our latest reminder that gun violence remains a crisis in our country and that our work to make every community safer isn’t done.’

So far, police have not announced any arrests or named any suspects, however the FBI tweeted it was looking for ‘one subject’ in the shooting

‘I know Judge Salas and her husband well, and was proud to recommend her to President Obama for nomination to New Jersey’s federal bench.

‘My prayers are with Judge Salas and her family, and that those responsible for this horrendous act are swiftly apprehended and brought to justice,’ said Democratic New Jersey Senator Bob Menendez in a statement.

The FBI, U.S. Marshals, New Jersey State Police along with the New Jersey Office of the Attorney General have been on the scene of the shooting throughout Sunday evening.

‘The FBI is investigating a shooting that took place at the home of Judge Esther Salas in North Brunswick Township, NJ early this evening July 19. We are working closely with our state and local partners and will provide additional updates when available,’ the bureau said in a statement.

So far, police have not announced any arrests or named any suspects, however the FBI tweeted it was looking for ‘one subject’ in the shooting.

Anyone who thinks they may have relevant information should call the FBI in Newark at 973-792-3001.