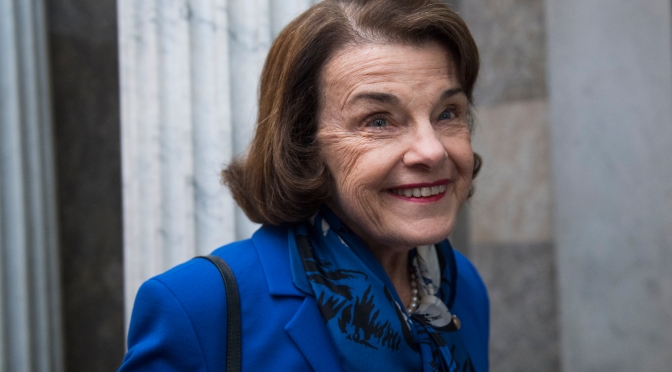 Federal law enforcement officials have questioned Senator Dianne Feinstein (D-CA) over stock trades Richard Blum, the senator’s husband, made ahead of the coronavirus market crash. The senator’s husband reportedly sold between $1.5 million and $6 million in biotech stock from January 31 to February 18.

Tom Mentzer, a spokesperson for Feinstein, told the San Francisco Chronicle on Thursday that the California senator turned over documents that show she wasn’t involved in her husband’s stock trades, and “voluntarily” answered “questions to set the record straight.”

The spokesperson told The New York Times in mid-March, after reports emerged that four senators sold stocks before the market tanked, that Feinstein’s assets are in a blind trust. Feinstein tweeted on March 20 that her assets have been in a blind trust throughout her senate career, which began in 1992.

During my Senate career I’ve held all assets in a blind trust of which I have no control. Reports that I sold any assets are incorrect, as are reports that I was at a January 24 briefing on coronavirus, which I was unable to attend.

Under Senate rules I report my husband’s financial transactions. I have no input into his decisions. My husband in January and February sold shares of a cancer therapy company. This company is unrelated to any work on the coronavirus and the sale was unrelated to the situation.

Allogene Therapeutics, the biotech company whose shares her husband traded, closed at $21.72 per share on January 31 and $24.25 on February 18. The company is currently trading at $42.55 per share.

Feinstein, the former chair of the Senate Intelligence Committee, disclosed the conversation with law enforcement officials as Senator Richard Burr (R-NC) agreed to step down from his position as Senate Intelligence Chair amidst an investigation into his stock activities on February 13.

In a statement, Senate Majority Leader Mitch McConnell (R-KY) said Burr approached him with the decision on Thursday morning, and they both agreed it “would be in the best interests of the committee.”

As the Los Angeles Times previously reported, the FBI obtained a search warrant for the senator and confiscated his cell phone. Law enforcement officials told the news agency that they were looking at his conversations with his stock broker and in previous days served a warrant to Apple in order to access information on the senator’s iCloud account.

Information about Burr’s stock activities was unearthed in late March by ProPublica, which reported that the senator and his wife “sold off a significant percentage of his stocks” over the course of 33 transactions in a single day. The trades amounted to between $628,000 and $1.72 million, reports the news agency.

Burr told reporters on Thursday that the he has been complying with the investigation since the beginning, and that “everybody ought to let this investigation play out,” reports CNBC. The senator also said he was stepping down as chairman because the ongoing investigation was a “distraction to the hard work of the committee.”

Burr has previously said that he made his financial decisions based on publicly available information, specifically referencing reports at CNBC daily health, according to The Associated Press.